Former India opener Wasim Jaffer also joined the chorus and opined his call on the playing XI. But unlike most, Jaffer allowed captain Ajinkya Rahane to pick his own playing 11 and instead left the fellow Mumbaikar with a secret coded message. Jaffer posted a secret coded message for Rahane and also invited Twitterati to decode the message. 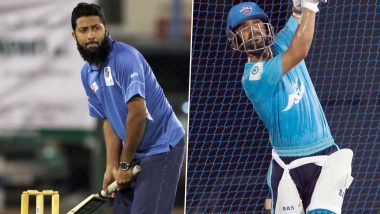 India face an uphill task as they aim to somehow recover from the humbling defeat at Adelaide and bounce back with a telling performance in the second Test match against Australia. India vs Australia 2nd Test will be played at Melbourne and it begins on Boxing Day. But the visitors have already dealt two big blows in the departure of captain Virat Kohli and the arm fracture to premier pacer Mohammed Shami leaving an already under-confident side on its haunches. A lot has also been said about the possible playing XI India should go with for the second Test with calls for the inclusion of Shubman Gill and KL Rahul increasing especially after Prithvi Shaw’s disappointment in the first match. India Likely Playing XI for 2nd Test: KL Rahul, Shubman Gill, Rishabh Pant in Indian Cricket Team for Boxing Day Test vs Australia.

Former India opener Wasim Jaffer, who is the highest capped and highest run-scorer in the Ranji Trophy, also joined the chorus and opined his call on the playing XI. But unlike most, Jaffer has allowed stand-in captain Ajinkya Rahane to pick his own playing XI and instead left the fellow Mumbaikar with a secret coded message. Jaffer, who has become quite popular on Twitter for his memes, posted a secret coded message for Rahane and also invited Twitterati to try and decode the message. Virat Kohli to Hold ‘Special’ Meeting With Team India Before Leaving Australia, Say Report.

“Dear @ajinkyarahane88, here's a (hidden) message for you. Good luck for Boxing Day! People In Cricket Know Grief In Life Lingers Aplenty Never Dabble Rise And Handcraft Unique Legacy,” Jaffer wrote on Twitter. He also asked fans to try and decode the message “PS: you guys are open to have a go and decode the msg too #INDvsAUS #AUSvIND,” Jaffer wrote. Take a loo at Jaffer's post.

Dear @ajinkyarahane88, here's a (hidden) message for you. Good luck for Boxing Day!

PS: you guys are open to have a go and decode the msg too 😉#INDvsAUS #AUSvIND

Fans were quick to decode the message and most suggested that he was perhaps trying to indirectly point towards ‘Gill and Rahul”. Cricket experts and Fans have called for inclusion for Gill and KL Rahul for the second Test match. Here are some top reactions to Jaffer's post on Twitter.

Now this is Epic 😅

All Indian Fans Want the Same?

I think along with you, all we Indian fans also wants the same 😊

Gill, who is touted to replace Kohli in India’s playing XI, showed promise with half-centuries in the warm-up matches. Gill scored 43 in the second innings of the first practice match and 65 in the pink-ball warm-up game. He is already touted as India's next batting great.

KL Rahul, on the other, could replace Shaw at the top after the latter’s dismal batting performance in the opening Test match at Adelaide. Shaw scored a combined four runs across two innings in the first Test. He was dismissed for a two-ball duck in the first innings and managed a run-a-ball four in the second before getting out.

Shaw was clean-bowled in both innings from similar deliveries. Rahul, who last played red-ball cricket for India in 2019, has a good record against Australia. Rahul scored a century in his first tour to Australia and also hit six half-centuries when Australia visited India.

(The above story first appeared on LatestLY on Dec 21, 2020 07:16 PM IST. For more news and updates on politics, world, sports, entertainment and lifestyle, log on to our website latestly.com).