The head coach of the Indian cricket team, Ravi Shastri, became a butt of the jokes going viral on social media. If you are having a dull day, the following memes and funny picture messages will make lit up your day. 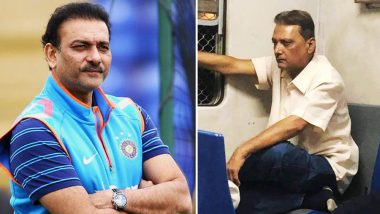 All hell broke loose on social media, on Monday, after a random internet user posted a picture of a doppelganger of Ravi Shastri travelling in a Mumbai local train. The head coach of the Indian cricket team became a butt of the jokes going viral on social media. If you are having a dull day, the following memes and funny picture messages will make lit up your day!

Ravi Shastri and his "full-bloodied spirit" has often seen him getting on the wrong side of the cricket fans. The image is going viral on Twitter and Facebook is that of a random person who happens to resemble a lot like Ravi Shastri.

The person has stark similarities with the coach of the Indian team. People have confused the man with Ravi Shastri. However, the reality is otherwise. The funny thing is that the jokes and memes are so hilarious that the images will leave you in guffaws.

We bring you a list of funny images that were circulating on social media platforms.

1. Ravi Shastri - Before and After!

2. Ravi Shastri, Did he forget anything?

When Ravi Shastri forgot to bring Daru in a train journey. pic.twitter.com/mr6TyvdSkw

When BCCI refused to pay for Ravi Shastri's travel fares citing his excessive alcohol addiction and zero contribution to the team as head coach. pic.twitter.com/0rUjdNVCTB

The tall stature of a man can only be judged by the fact how grounded he is.

Still you doubt his character.

When you get a window seat but later realize that you got a wrong Mumbai Local. pic.twitter.com/ww7i3OjeJO

Disclaimer: The article is not written to hurt the public image of any individual mentioned in the article. We at LatestLY do not intend to hurt or insult any person’s sentiment involved. We hope the following piece of information amuses you as much as it did to us.

(The above story first appeared on LatestLY on Nov 05, 2018 10:40 PM IST. For more news and updates on politics, world, sports, entertainment and lifestyle, log on to our website latestly.com).