RCB underwent massive changes to their squad at the IPL 2021 players’ auction releasing as many as 10 players. The franchise then signed eight players at the IPL 2021 auction, which included big-money signings such as Glenn Maxwell and Kyle Jamieson. RCB signed New Zealand all-rounder Jamieson for a record 15 Crore and Maxwell for 14.25 Cr. 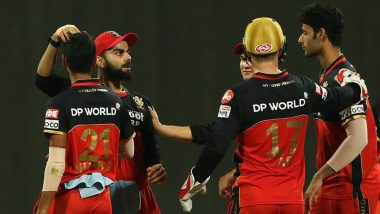 Having broken the jinx of three consecutive IPL seasons without making the playoffs, Royal Challengers Bangalore (RCB) will want to end a 13-season wait for the elusive Indian Premier League (IPL) title this time. The Virat Kohli-led side made the IPL playoffs for the first time in four seasons last year. They have played the IPL final thrice but are yet to win the trophy once. Last season, they made the playoffs despite losing their last four league stage matches but were beaten by Sunrisers Hyderabad in the IPL 2020 eliminator. IPL 2021: Devdutt Padikkal, Jhye Richardson and Other Youngsters To Watch Out For in Indian Premier League Season 14.

RCB underwent massive changes to the squad ahead of the IPL 2021 players’ auction releasing as many as 10 players from the squad. The franchise then signed eight players at the IPL 2021 auction, which included big-money signings such as Glenn Maxwell and Kyle Jamieson. RCB signed New Zealand all-rounder Jamieson for a record 15 Crore and Maxwell for 14.25 Cr. They also bought Australian all-rounder and T20 veteran Dan Christian at the auction strengthening their middle-order. All three could play in the same playing XI for RCB. IPL 2021 Schedule in PDF for Free Download: Get Indian Premier League 14 Venues, Full Time Table, Fixtures and Match Timings in IST.

Among the domestic players, RCB signed exciting Kerala wicketkeeper-batsman Mohammed Azharuddeen, who smashed a 37-ball century in the Syed Mushtaq Al Trophy earlier this year. KS Bharat, Rajat Patidar and Sachin Baby are among the other amazing buys. All those signings have given RCB a balanced squad this season. Captain Virat Kohli later announced that he was going to open the batting for RCB at this year’s IPL. Ahead of the start of IPL 2021, take a look at the likely RCB playing XI.

Openers: Devdutt Paddikkal scored 473 runs for RCB last season and was their highest run-scorer in IPL 2020. His solid performance at the top of the order took the side into the playoffs for the first time in four seasons. He has continued that form in the domestic league and scored 737 runs, with the help of four centuries three fifties, in just seven games at the recently concluded Vijay Hazare Trophy.

Padikkal is likely to partner Virat Kohli at the top. The Indian skipper announced at the end of the T20I series against England that he will be opening the batting for RCB this IPL. Kohli scored a majestic 80 off just 52 deliveries in the fifth T20I while opening the batting alongside Rohit Sharma.

Middle-Order: Mohammed Azharuddeen could be pushed to the No 3 slot, one occupied by skipper Kohli until now. Azharuddeen showed his ability with the bat in the Syed Mushtaq Ali Trophy with a 37-ball hundred which is the third-fastest T20 century by an Indian batsman. He will be followed by AB de Villiers and Glenn Maxwell at 4 and 5. AB Villiers has been essaying the role of a finisher at RCB for eight seasons now. But this season he will share the responsibility with Maxwell.

The Australian had a disastrous season for Punjab Kings (erstwhile Kings XI Punjab) last year. But RCB have shown faith in his abilities by shelling out 14.25 Crores for his signature. Maxwell has succeeded in that role for Australia and is expected to do something similar for RCB. With Kohli and De Villiers there to take more burden, Maxwell will have the ability to play a free hand.

All-Rounder: Maxwell is also one of the all-rounders in the RCB side. He will be joined by Washington Sundar and Kyle Jamieson. RCB made Jamieson the second most expensive overseas player in IPL history after spending Rs 15 Crore for him. Jamieson, in his short international career, has shown glimpses of his talent.

He has a Test half-century for New Zealand and also has a long handle in T20Is. Sundar, similarly, has shown his abilities with both the ball and bat in recent times for India. He has also been regular for RCB and often opens the bowling for them in the powerplay.

Bowlers: Yuzvendra Chahal, who has taken the most number of wickets for RCB in the franchise’s history, leads the bowling attack. He will be joined by Navdeep Saini and Mohammed Siraj in the attack. Kane Richardson will be the only overseas bowler in playing XI.

(The above story first appeared on LatestLY on Mar 23, 2021 05:59 PM IST. For more news and updates on politics, world, sports, entertainment and lifestyle, log on to our website latestly.com).