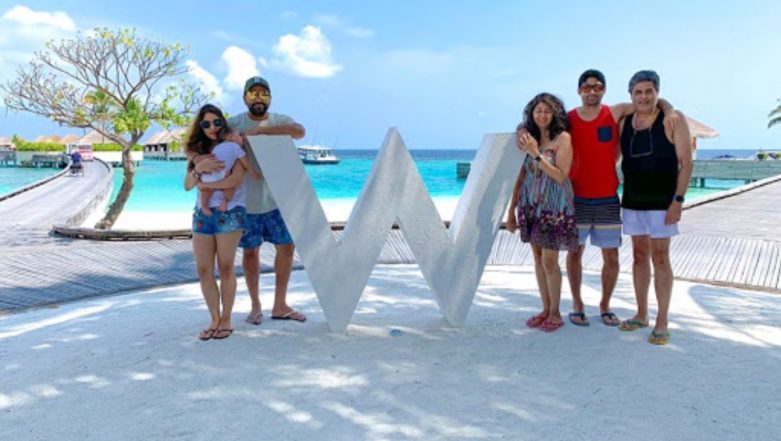 Indian cricket team vice-captain Rohit Sharma, who led Indian Premier League franchise Mumbai Indians to a record fourth IPL title, left for the Maldives for a short family break before the all-important upcoming cricket World Cup. The Maldives seems to be the most-favoured destination for the Sharma family. This is the second trip in recent times, Rohit and wife Ritika Sajdeh along with their friends have paid a visit to the Island nation. However, this time around, they have their six-month-old daughter, Samaira accompanying them. Going by their holiday pics, the Indian opener already looks charged up for the ICC tournament. Rohit Sharma's Daughter Samaira Is Doing 'Swag Se Swagat'! View Cute Pic Shared by Mumbai Indians' Captain.

Rohit on Thursday shared a few sweet pictures from the vacation on his social media account where he can be seen sharing some amazing family time with his wife, daughter and few close friends.

Take a Look At the Pictures:

The Indian opening batsman captioned one of his posts as “home away from home”, which once again shows how much he loves visiting this island nation located on the Indian Ocean. Back in 2017 also, Rohit had taken off with his wife Ritika Sajdeh for a short vacation away from cricket.

Rohit and Ritika enjoying in the beaches of Maldives

Partner in crime for life ❤️ never as zen as I am here in this part of the world. Perfect gateway @wmaldives #WMaldives. P.C - @chunkymathew

Another Picture of Rohit Sharma Having a Good Holiday Time

Blue everywhere, I love it!

Although he has not had a great IPL tournament, Rohit is still considered to be one of the best limited-overs batsmen of this generation and on his day can demolish any bowling attack. The 32-year-old, who has three ODI triple centuries to his name, will aim to give India a fiery start at the top to help his side clinch a third World Cup title.

He guided Mumbai Indians to a record fourth IPL title after defeating Chennai Super Kings by one run in the IPL finals last Sunday. Rohit is also the first player to win five IPL titles, having lifted his first with the now defunct Deccan Chargers.

India begins their World Cup against South Africa on June 5, prior to which they are also scheduled to play two warm-up matches against New Zealand and Bangladesh on June 25 and 28 respectively. The World Cup will be held in a round-robin format with four sides qualifying for the semi-finals.