Rajasthan Royals take on Royal Challengers Bangalore in the IPL 2022 Qualifier 2. For live streaming online and TV telecast details of RR vs RCB. 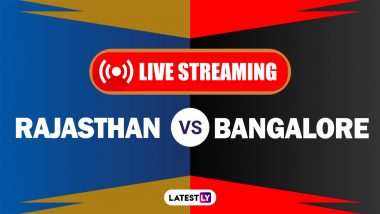 Royal Challengers Bangalore, the perennial underachievers of the Indian Premier League, have the chance to book a place in the finals of the event when they take on Rajasthan Royals in qualifiers 2. Their fans have waited patiently over the years for the team to do well and their dominating performance against Lucknow Super Giants has given them hope. The team were not consistent enough in the group stage but luck favoured them and they look every bit the part now. Rajasthan Royals were beaten by Gujarat Titans in the qualifier 1 but are a decent side with some champion crcketers. RR vs RCB Preview: Likely Playing XIs, Key Battles, Head to Head and Other Things You Need To Know About TATA IPL 2022 Qualifier 2.

Rajat Patidar announced himself on the big stage with a magnificent century in the last match at a crucial juncture. The form of Virat Kohli remains a worry and the former Indian skipper will have to improve considerably to thwart the opposition bowlers from dominating in the powerplays. Harshal Patel has recovered from a hand injury and the death over specialist will likely be part of the playing eleven. In term of finishers, RCB have the best in the business in the form of veteran Tamil Nadu batsman Dinesh Karthik.

R Ashwin and Prasidh Krishna did not have the best of games against Gujrat and need to work on their line and length. Lack of depth in batting is a major problem for Rajasthan and if RCB can get the likes of Sanju Samson, Jos Butler and Shimron Hetmyer early, they will hold the upper hand in the contest. Daryl Mitchell is no longer part of the squad after he left the Royals camp to travel back to New Zealand. Rajasthan Royals vs Royal Challengers Bangalore Betting Odds: Free Bet Odds, Predictions and Favourites in RR vs RCB IPL 2022 Qualifier 2.

Those unable to watch the RR vs RCB match live on television can follow the game online. Disney+ Hotstar will be live streaming the Rajasthan Royals vs Royal Challengers Bangalore match online for its fans in India. Fans, however, need to subscribe to Hotstar by paying a nominal subscription fee. Tough game for both these sides but Bangalore just might win it to book a place in the finals.

(The above story first appeared on LatestLY on May 27, 2022 03:47 PM IST. For more news and updates on politics, world, sports, entertainment and lifestyle, log on to our website latestly.com).