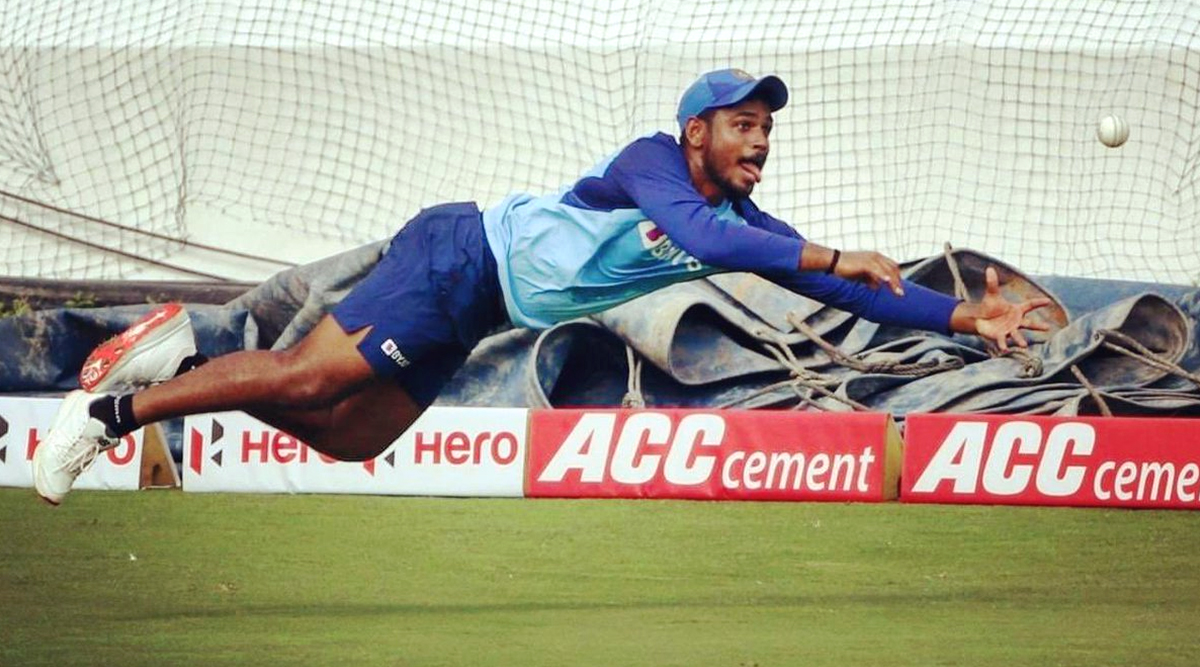 While Sanju Samson has been overlooked by selectors for playing 11 since a couple of the previous series, it looks like he will replace Rishabh Pant in India vs West Indies 2nd T20I 2019. Sanju Samson, a wicket-keeper batsman, has been constantly losing his place to Rishabh Pant in India's international games. But his latest Twitter post draws speculations that he might be offered a chance in the upcoming IND vs WI T20I 2nd T20I 2019 match. Posting a photo of himself while fielding, the Rajasthan Royals’ cricketer mentioned about his probable entry in the 2nd T20I game between Virat Kohli-led India and Kieron Pollard-led West Indies. Sanju Samson Open to Keep Wickets in India vs West Indies T20I Series 2019, Says Team Is Priority.

“Here we come THIRUVANANTHAPURAM”, Sanju Samson captioned the Twitter post. The right-handed batsman was seen diving to catch the ball while fielding in the photo. Have a look at the tweet below. India vs West Indies 1st T20I 2019: Twitterati Applaud Virat Kohli for His Unbeaten 94, Rishabh Pant Gets Trolled Once Again.

Sanju Samson came to massive limelight after hitting a century during IPL 2019 while playing for Rajasthan Royals. Rishabh Pant has been India’s steady wicket-keeper in the absence of MS Dhoni for a long time. But he has shown a series of poor performances in international matches. Pant accounted for many goof-ups behind the stumps during recent India vs Bangladesh 2019 T20I matches. He also loses his wicket at crucial moments which often takes a big toll on the Indian team. The Delhi Capitals player also becomes a victim of trolls on social media over his faults.

During India vs West Indies 1st T20I 2019 match in Hyderabad, Rishabh Pant started well with a six but lost his wicket with a loose shot at 18-run score. However, India won the match after KL Rahul (62) and Virat Kohli (94*) played magnificently to take India to victory. India won the match by 6 wickets in the 19th over after successfully chasing the 208-run score.