Both teams have done well to reach this stage of the multi-nation competition and will be aiming to register maximum points. 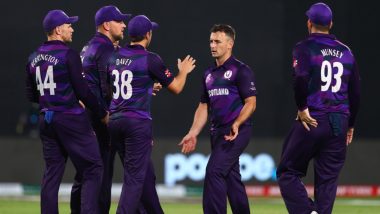 Scotland (SCO) and (NAM) in the latest round of Super 12 fixtures in the ongoing T20 World Cup 2021. The SCO vs NAM clash will be played at the Sheikh Zayed Stadium in Abu Dhabi on October 27, 2021 (Wednesday). Both teams have done well to reach this stage of the multi-nation competition and will be aiming to register maximum points. Meanwhile, fans searching for SCO vs NAM, Dream11 Team prediction for T20 World Cup can scroll down below for details. AFG vs SCO Stat Highlights, T20 World Cup 2021: Mujeeb ur Rahman, Rashid Khan Dismantle Scotland.

Meanwhile, Dream11 fans should continue reading to find out who can be your best pick as captain and vice-captain while you select your fantasy team for this game. Notably, the selection of captain and vice-captain is crucial when it comes to earning rewards in Dream11. Captain fetches you 2x points, while for vice-captain, you get 1.5x points and picking the right players for these two slots while making your fantasy team could make all the difference. Here are the two suitable players for the slot.

The Namibian all-rounder has been in great form in the competition and could be named as the captain of your SCO vs NAM Dream11 Fantasy Team. David Weise has played sensational knocks in his past two games and is expected to carry his form in this game as well.

The Scotland skipper is one of the most experienced players in the squad and can be selected as the captain of your SCO vs NAM Dream11 Fantasy Team. Coetzer scored 40+ runs against Oman but missed out against Afghanistan and will be aiming to get back amongst runs.

(The above story first appeared on LatestLY on Oct 26, 2021 09:28 PM IST. For more news and updates on politics, world, sports, entertainment and lifestyle, log on to our website latestly.com).