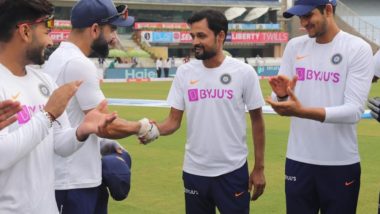 Shahbaz Nadeem who was added in the third Test match against South Africa yesterday after Kuldeep Yadav complained of shoulder pain. Yadav complained of left shoulder pain on Friday and the Indian team management decided to add Nadeem to the squad for the third Test match against South Africa which is supposed to be hosted at the JSCA Stadium in Ranchi. Now, ahead of the game, Nadeem was handed a Test cap by Virat Kohli. Needless to say that this was quite a special moment for the leg spinner. India Vs South Africa, Cricket Score 3rd Test Match.

The official account of the International Cricket Council shared the picture of Nadeem getting a cap from Kohli. India has already won the first two games in the Test series and now enter a dead rubber game. "We are not going to take the foot off the gas in the third Test. We are looking for a result and hopefully make it 3-0. No one is going to relax at any stage, that is a guarantee," Kohli had said after the Pune Test.

For now, check out the picture shared by the ICC:

The 30-year-old orthodox left-arm spinner has taken 424 wickets in 110 first-class matches with 19 five-wicket and five 10-wicket hauls. "The decision to add Nadeem was made after Kuldeep Yadav complained of left shoulder pain on Friday," chairman of selectors MSK Prasad was quoted as saying in a BCCI press release. In 2018, Nadeem was called up in the Indian ODI team for the T20 series against the West Indies at home but did not play a game.

(The above story first appeared on LatestLY on Oct 19, 2019 09:53 AM IST. For more news and updates on politics, world, sports, entertainment and lifestyle, log on to our website latestly.com).