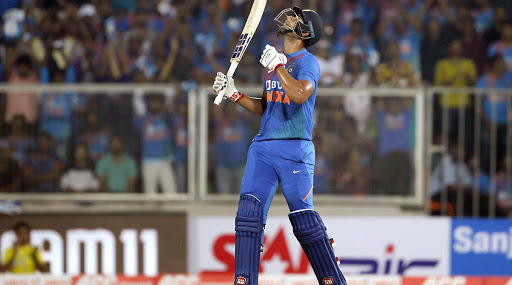 Thiruvananthapuram, December 9: All-rounder Shivam Dube believes India, who faced a crushing defeat in the second T20I against the West Indies, will bounce back strongly in the series decider to be played in Mumbai. India, who had registered their highest-ever successful chase in the shortest format of the game in Hyderabad, faced a crushing eight-wicket defeat in the second T20I on Sunday evening. Dube scored his maiden half-century and scored 54 runs to help India put a decent total of 170 runs on the board. However, West Indies batsman Lendl Simmons' 67 not out guided his side to the victory.  Shivam Dube Hits Fifty While Batting at No. 3 During India vs West Indies 2nd T20I 2019 Match, Twitterati Laud Virat Kohli for Promoting the Youngster.

"It is really special for me because it is first 50 from my side to the Indian team. But not happy because winning the match is more important for me," Dube told reporters after the match. The Indian team came out with a below par performance in the field for the second consecutive match. They dropped two catches in the fifth over of West Indies' chase, offering the two openers -- Simmons and Evin Lewis -- a life each during the powerplay. While Lewis, who was dropped on 17 off the fourth ball of the over, carted three sixes thereafter en route his 35-ball 40, Simmons, who was dropped two balls earlier, went on to steer the chase with an unbeaten 45-ball 67. India vs West Indies 2nd T20I 2019: No Total Will Be Good Enough if We Field So Poorly, Says Virat Kohli.

Talking about India's fielding, Dube said had the team hung on the catches, the result could have been different. "Yes, we dropped some catches but I think it is part of the match and even they dropped some catches. But I think we are the best team," he said. "I think we could not get some catches and if that were taken, it would have changed everything. We lost the match today but I think we will come back in the next match," he added. Meanwhile, West Indies bowler Hayden Walsh said that the visitors will go for the kill and would aim to clinch the series on Wednesday. "The main thing is to win the series and the whole goal and everything for me right now is winning the series and help the team to do their best," Walsh said.