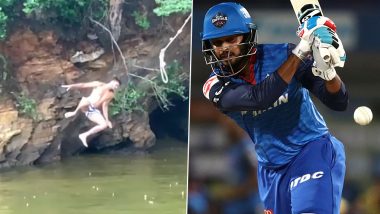 Indian cricketer Shreyas Iyer took part in some adventure after a spectacular knock in India vs West Indies 2nd ODI at Trinidad. Iyer enjoyed swimming in a river in Trinidad and imitated acts of Tarzan while jumping into the water. The video of the fun moment was shared by the right-handed batsman on his Instagram account. Yuzvendra Chahal Interviews Virat Kohli in Latest Episode of Chahal TV, Indian Skipper Reveals the Reason Behind His Dancing Moves During Matches.

In the video, Iyer held a rope and jumped into the river just like the cartoon character Tarzan. "You can’t tell me I ain’t fly!", the 24-year-old cricketer wrote along with the video. Have a look. Virat Kohli’s 42nd ODI Century Brings #KingKohli on Top of Social Media Charts; Twitter Goes Mad.

You can’t tell me I ain’t fly!

Iyer was great with his bat during the 2nd ODI against West Indies, smashing 71 runs while batting at middle-order position. The youngster was given a chance in India’s tour of West Indies 2019 along with Manish Pandey as the selectors look for a permanent middle-order batsman for the team.

India defeated West Indies by 59 runs after a century by Indian skipper Virat Kohli led India to 279-7 batting first. West Indies remained short of 59 runs in the end while chasing a DLS upgraded target of 270 in 46 overs. West Indies were bowled out for 210 runs in 42 overs. The match saw Chris Gayle (11) surpassing Brian Lara as West Indies’ top run-getter in ODIs. Kohli smashed his 42nd century and went past Sourav Ganguly in most number of ODI runs. Earlier, India defeated West Indies in T20 series 3-0. The India vs West Indies 3rd ODI will be played in Port of Spain, Trinidad on August 14, Wednesday.

(The above story first appeared on LatestLY on Aug 13, 2019 10:35 AM IST. For more news and updates on politics, world, sports, entertainment and lifestyle, log on to our website latestly.com).