Australia white-ball skipper Aaron Finch has been overwhelmed by the response his team has received during the limited-over series, comprising three T20I and five ODIs, which concluded at the R. Premadasa Stadium on Friday night. 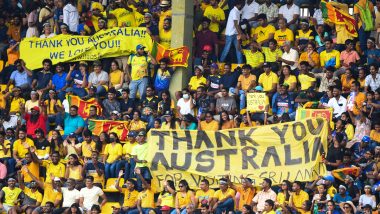 Colombo, June 25 : Australia white-ball skipper Aaron Finch has been overwhelmed by the response his team has received during the limited-over series, comprising three T20I and five ODIs, which concluded at the R. Premadasa Stadium on Friday night. While Australia won the T20I series 2-1, Sri Lanka clinched the ODI series 3-2. The limited-overs series will now be followed by a two-Test series beginning at Galle on June 29. Sri Lanka Fans Turn Up in Yellow Jerseys, Thank Australia for Touring the Island Nation (See Pics).

Speaking about the hardships the Sri Lankans have faced over the last few months in the wake of a severe economic crisis, Finch said, "We're very grateful that we've been able to tour here. We know the difficulties that Sri Lanka has faced in recent times. Hopefully over these eight white-ball games we've been able to provide some joy to people in the country." Despite the recent problems faced by the country, including long hours of power cuts, the Sri Lanka team showed the world their extraordinary spirit, winning their first series at home against Australia in 30 years.

Finch, the captain of the side on its first tour of the country since 2016, added that the support provided by the people of the island nation was "second to none". Thousands of people in Australia's traditional colours descended on the R. Premadasa Stadium for the final ODI in a show of solidarity for the visiting team, and Finch said it was simply wonderful. "It was outstanding, the Sri Lankan people are wonderful people. The support that they provide is second to none. They are great cricket supporters, it's not just constant noise; they ride the emotions of the game. When Sri Lanka are up and about, that's as loud as anywhere you'll visit in the world," Finch was quoted as saying by ICC. SL vs AUS, 5th ODI 2022: Australia Win Match by Four Wickets, Sri Lanka Clinch Series 3–2.

In a video shared by cricket.com.au, Australia all-rounder Glenn Maxwell said, "That was pretty extraordinary. I was just saying to the boys that was one of the most special feelings. Being able to walk around the ground and have a foreign country cheer for you. "A lot of times when Australia tours we are generally the enemy and there's not too many Australian fans in the stands. But to have the support and fans that are here at the moment is truly extraordinary.

"Everyone's wearing yellow. They've got all the Australian flags all over the place. It's extremely special and it's a credit to everyone that's been able to get out here. It's been such a tough time obviously for the locals. For them to come out and support us, hopefully, both teams can entertain them and they've had a really good time during the one-day series."

(The above story first appeared on LatestLY on Jun 25, 2022 12:54 PM IST. For more news and updates on politics, world, sports, entertainment and lifestyle, log on to our website latestly.com).