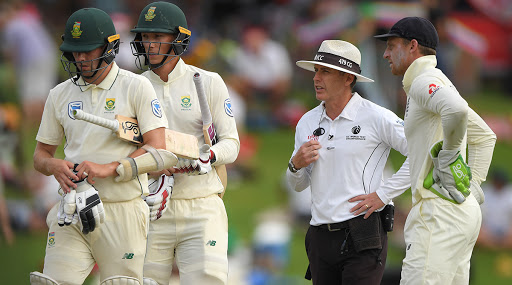 South Africa end Day 2 of the match in a strong position as the Proteas currently lead by 175 runs with Rassie van der Dussen and Anrich Nortje still out there on the crease. A total of 15 wickets fell on the second day as the bowlers are dominating the proceedings in the match. Faf du Plessis and Rassie steadied the Proteas ship after losing three quick wickets as they end the day on 72/4. Jofra Archer was the pick of the English bowlers as he bagged two wickets while Anderson and Broad helped themselves to one each. Fans searching for live score details and ball-by-ball commentary of the game can scroll down below for more details. South Africa vs England Live Cricket Score, 1st Test 2019.

Day 2 started with the home side getting all out for 284 but the visitors struggled while chasing a sub-par first innings total. Joe Denly was the only English batsmen who stood out on Day 2 as he scored a fighting half-century and just Ben Stokes was the only other batsmen to reach the 30-run mark. Vernon Philander was outstanding in his performance as the pacer took four wickets’ for just 16 runs in his 14.2 overs. The Proteas took a 103-run first-innings lead but lost three quick wickets in the third innings until Faf and Rassie steadied the ship. South Africa vs England 1st Test Match 2019 Day 3 Live Streaming on Sony Liv.

As of now, South Arica look in a good position in the match and the visitors need to get quick wickets to pull themselves back into the game. You can follow the live updates and ball-by-ball commentary SA vs ENG Test match on LatestLY.