Rahul Dravid is widely favoured to take over the role of the Indian cricket team's new coach after Ravi Shastri steps down from the role following the T20 World Cup 2021. Dravid, a day ago, formally applied for the job. 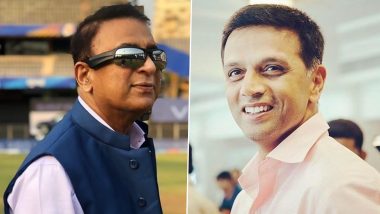 Sunil Gavaskar reckons that Rahul Dravid is the odds on favourite to become India's next head coach after the latter applied for that job a day ago. It was widely reported some weeks ago that Dravid is the favourite to take over the role after Ravi Shastri steps down following the T20 World Cup 2021. But a formal process of inviting applications was done and Dravid, according to reports, threw in his hat for the job. Gavaskar lauded Dravid's credentials and stated the latter would be the right man for this role, stating that his formal application was only a formality.  "Without a doubt. I don't think anyone else even needs to apply anymore. The way he has handled the Under-19 team, given them direction, the manner in which he has worked at the NCA, it just shows his capability… not only inside the ground but out of it as well. He is good at administrative duties too; he has that capability. And that is why I think him applying for the post is just a formality," Gavaskar said, as quoted by Sports Tak. Rahul Dravid Applies for Team India Head Coach Post, VVS Laxman Likely to Take over at NCA

Madan Lal, one of Gavaskar's national teammates too agreed with this opinion, adding that Dravid's experience of coaching from the junior level makes him fit for this role. He said, "Like Sunny bhai mentioned, he already has led India A and Under-19 teams to so many tours and recently even coached the national team in Sri Lanka, so when you start coaching from a junior level, you know the players that have come through the ranks. This is the best thing that has happened. He has graduated from the bottom and there can’t be a better candidate. He has a calm demeanour and has several qualities that will help the Indian team go even higher."

If reports are to be believed, then Dravid is clearly the frontrunner to take over from Shastri after he steps down from the role. India currently are competing in the T20 World Cup 2021 competition in the UAE and Oman and their campaign got off to a shaky start with a thumping 10-wicket loss to Pakistan. India next face New Zealand on October 31.

(The above story first appeared on LatestLY on Oct 27, 2021 10:09 AM IST. For more news and updates on politics, world, sports, entertainment and lifestyle, log on to our website latestly.com).