Team RR Key Players for IPL 2020: Jos Buttler, Robin Uthappa, Steve Smith and Other Cricketers to Watch Out for From Rajasthan Royals

It will be interesting to see if RR continue to invest in youngsters or the points table pressure gets the better of them. Ahead of a gruelling season of the Indian Premier League, a look at the players to watch out for Rajasthan Royals. 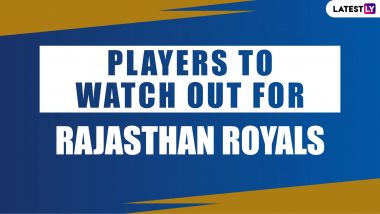 The champions of the inaugural Indian Premier League, the Rajasthan Royals are a team known for getting the best out of limited resources. Last season was a major disappointment for the team as they finished seventh in the points table. Head coach Andrew McDonald has a big job on his hands as he looks set to revive the fortunes of this team. The franchisee over the years has given us some brilliant cricketers like Yusuf Pathan and Ravindra Jadeja who were relatively unknown faces when they joined the club. It will be interesting to see if they continue to invest in youngsters or the points table pressure gets the better of them. Ahead of a gruelling season of the Indian Premier League, a look at the players to watch out for Rajasthan Royals. RR IPL 2020 Schedule With Date & Timings in IST: Rajasthan Royals Matches of Indian Premier League 13 With Full Timetable, Fixtures in UAE.

The destructive English wicketkeeper batsman can single-handedly force the opposition bowlers to submission. He has been in fine form in whatever little cricket that has been played post the COVID outbreak and will be immense for the Rajasthan Royals opening the innings.

Although he has to vie for a place in the team with youngster Yashasvi Jaiswal, Robin Uthappa is a seasoned campaigner when it comes to the IPL and this should go in favour of the team. He is a versatile batsman that can score runs in a variety of positions depending on the match situation. Rajasthan Royals Team SWOT Analysis: Ahead of IPL 2020 Find Out Positives And Negatives of Steve Smith’s RR.

Rajasthan Royals’ skipper has a huge task on his hand, reviving the fortunes of the misfiring Royals. One of the best batsman of the modern era and an equally brilliant skipper, Steve Smith can be the focal point in the unit around whom everyone performs. He may join a week later due to the quarantine rules which is an issue though.

With uncertainty looming large over Ben Stokes participation in the IPL after the English all-rounder returned home to visit his ailing father, David Miller is his likely replacement. David Miller has been struggling for form in the league for a few seasons now but his clean hitting makes him a dangerous player. RR Team Profile for IPL 2020: Rajasthan Royals Squad in UAE, Stats & Records and Full List of Players Ahead of Indian Premier League Season 13

One of the best pacers in the world currently, Jofra Archer is the man that will lead the Rajasthan Royals bowling unit. A genuine wicket taker whose thunderbolt yorkers in the death can make even the best batsman grasping for breath, Archer will be rearing to bowl in the Indian Premier League.

Amongst big and famous names. Rajasthan Royals have Mayank Markande in their squad. The spinner did well for Mumbai Indians in his debut season, but last year he played only three matches for Delhi Capitals. In the IPL 2020, Markande could be the next big thing for Royals.

Rajasthan Royals have uncertainty over the participation of a number of players in the squad which is not an ideal way to start. If they are to manager to play their preferred eleven, expect them to do well.

(The above story first appeared on LatestLY on Sep 07, 2020 07:31 PM IST. For more news and updates on politics, world, sports, entertainment and lifestyle, log on to our website latestly.com).