Ashwin had gone to produce a remarkable fightback at Sydney and in the company of Hanuma Vihari, Cheteshwar Pujara and Rishabh Pant, heled India save the Test. That sledge from Paine seems to have resurrected Ashwin’s batting. He had gone without a century since 2016 and has scored only five fifties in that period. 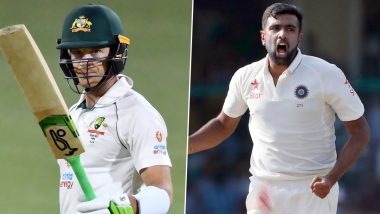 Indian cricket fans did not forget Tim Paine’s sledge of Ravichandran Ashwin and came back at the Australia Test captain after Ashwin hit a century in the second Test against England. Ashwin scored his fifth Test century on day 3 of the IND vs ENG Test in Chennai becoming only the second player after Ian Botham to score a hundred and also pick five wickets on three different occasions. Paine had clashed with Ashwin during India’s tour of Australia and had sledged the all-rounder during the third Test of the tour in Sydney. India vs England 2nd Test 2021 Stat Highlights Day 3: Ravi Ashwin Enters Record Books As Hosts Near Victory.

“I can’t wait to get you to the Gabba Ash I’ll tell you what, woo hoo,” Paine had told Ashwin when the latter was battling a twisted back to save India the Test at Sydney. Following a clash of words with Ashwin, Paine had called the Indian off-spinner a ‘dickhead’. “At least my teammates like me, dickhead. I’ve got a lot more Indian friends than you do. “Even your teammates think you’re a goose. Don’t they? Every one of them," Paine had said. Twitter Laud Ravichandran Ashwin, Virat Kohli for Master Knocks in India vs England 2nd Test 2021, Praise Mohammed Siraj for ‘Epic Reaction’ on Ashwin’s Hundred.

Ashwin had gone to produce a remarkable fightback at Sydney and in the company of Hanuma Vihari, Cheteshwar Pujara and Rishabh Pant, heled India save the Test. That sledge from Paine seems to have resurrected Ashwin’s batting. He had gone without a century since 2016 and has scored only five fifties in that period. But Ashwin went on to play a marvellous knock of 39 from 128 deliveries at Sydney and has now smashed his first hundred in four years. Take a look at how fans teased Paine and thanked him for bringing back Ashwin’s batting.

Tim Paine After Realising He is Trending

As Tim Paine is tranding after 2nd test between India and England.

Tim Paine After Realising Ashwin Has More Test Hundreds Than Him

Tim paine after hearing this pic.twitter.com/8v6Bro9Shf

Siraj and the rest of the Indian team's celebration of Ashwin's hundred rather debunks Tim Paine's theory that none of them like him, doesn't it?

Ashwin's Teammates After He Scores a Hundred

Ashwin’s century came off 134 deliveries and it was studded with 14 boundaries and a maximum. He reached the milestone hundred after edging Moeen Ali for a boundary through the third man region. He was eventually dismissed for 106 runs from 148 deliveries after helping India set England a mammoth target to win the Test.

(The above story first appeared on LatestLY on Feb 15, 2021 07:45 PM IST. For more news and updates on politics, world, sports, entertainment and lifestyle, log on to our website latestly.com).