The home side put up a magnificent batting performance in the first innings of the clash and scored 240 runs. The top-three of Indian batsman all scored in excess of 70 and tormented the West Indies bowlers. In reply, the Caribbean side never really looked in the contest and were restricted to just 173 runs. 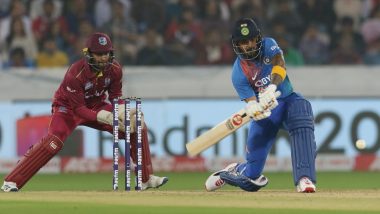 Virat Kohli and men put up an all-round show in the 3rd India vs West Indies T20I and clinched the match by 67 runs, winning the series 2-1. The home side put up a magnificent batting performance in the first innings of the clash and scored 240 runs. KL Rahul, Rohit Sharma and Virat Kohli scored in excess of 70 runs and tormented the West Indies bowlers. In reply, the Caribbean side never really looked in the contest and were restricted to just 173 runs. Twitterati also lauded the home side's spectacular performance and below we look at how they reacted. India Vs West Indies, Live Cricket Score 3rd T20I Match.

Earlier in the match, Kieron Pollard won the toss and opted to field first. The decision backfired as Rohit and Rahul looked their premium best and gave their side an astounding start. In the process, Rohit became the first Indian batsman to smash 400 sixes in international cricket. Skipper Virat Kohli also joined the party later and 70 runs off just 29 runs. The interesting fact is that now Virat and Rohit are the joint leading run-scorers in international cricket. In reply, Kieron Pollard scored a fifty and other players chipped in with small cameos. However, it didn’t prove to be enough. Meanwhile, let’s look at how netizens reacted on India’s victory. Rohit Sharma Becomes First Indian Batsman to Complete 400 Sixes in International Cricket, Reaches Milestone During India vs West Indies 3rd T20I 2019.

CONGRATS #TeamIndia on the series win by 2-1

Kohli and Rohit are now on same score at International T20's with 2633 runs.

India have grabbed the series on the back of Rohit and Rahul's fine half centuries.But it was Kohli's show today and the way he turned himself as a pinch-hitter was a treat to watch which you rarely see him hitting sixes at will.The bowlers too have done well today. #INDvWI

Hope this series seals KL Rahul as India's Opener.They should not make KL bat at 3,with Shikhar-Rohit opening & Kohli at 4.Virat should be No 3 always.Neither they should let Dhawan play at 3.KL should be given a long rope.Just to accomodate Dhawan, don't spoil KL's form.#INDvWI

The ICC World T20 2020 is less than a year away and the Indian side must have gained a lot of confidence by thrashing the defending champions of the mega tournament. Now, the two sides will lock horns in the ODI leg of the tour. The first of the three-match series will be played at December 15 in Chennai.

(The above story first appeared on LatestLY on Dec 11, 2019 11:14 PM IST. For more news and updates on politics, world, sports, entertainment and lifestyle, log on to our website latestly.com).