Will Arjun Tendulkar Make His Debut for Mumbai Indians in IPL 2021?

Five-time champions Mumbai Indians bought Sachin Tendulkar’s son Arjun for his base price of INR 20 lakh in IPL 2021 auction, and it would be interesting to see how this season unfolds for the junior Tendulkar. Unlike his father, Arjun is an all-rounder – a left-arm pacer and a hard-hitting batsman lower down the order. 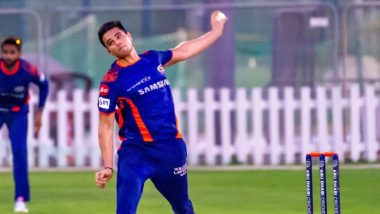 Son of Indian cricket legend Sachin Tendulkar, Arjun Tendulkar bagged his maiden Indian Premier League (IPL) contract this season. Five-time champions Mumbai Indians bought the all-rounder for his base price of INR 20 lakh, and it would be interesting to see how IPL 2021 unfolds for the junior Tendulkar. Although there are many youngsters and rookies in IPL this season, none of them would be under the pump more than Arjun.  Sachin Tendulkar, international cricket’s highest run-scorer, shattered numerous records in his illustrious career, and now, the world is expecting his son to carry forward the Master Blaster’s legacy. Arjun Tendulkar Reacts After Being Bought By Mumbai Indians At IPL 2021 Players Auction, Says Was Childhood Dream to Play for Them.

Unlike his father, Tendulkar is an all-rounder – a left-arm pacer and a hard-hitting batsman lower down the order. Arjun indeed had the best of resources to improve his game, but delivering at the big stage would be a different ball game. He has bowled to some big names in the nets, and once, he even injured England dasher Jonny Bairstow with his toe-crushing yorker during a practice session. At the state level, Tendulkar has delivered several impressive performances with both bat and the ball. However, he didn’t get many chances to play for India Under-19 and the 21-year-old is even yet to make his First-Class and List-A debut. IPL 2021 Points Table Updated.

Notably, Sachin also played for Mumbai Indians throughout his IPL career and was even part of the side’s coaching staff for few seasons after retirement. Hence, many eyebrows were raised when MI bought Arjun in the IPL auctions. With nepotism being a hot topic of discussion in India lately, Arjun’s failure in IPL could ignite a lot of flak, and the all-rounder would be aware of it. Moreover, MI also don’t have a shortage in the all-rounder or the fast bowling department. Hence, the question arises whether Arjun will make his IPL debut this season.

Will Arjun Tendulkar Make Debut For MI in IPL 2021?

The most successful side in IPL history, MI arguably have the most settled combination this season, and they are also not known to tinker with their line-up much. With Arjun being a bowling all-rounder, the team management wouldn’t be keen to put him in the top seven. Moreover, MI are currently playing with three all-rounders in their top seven in Krunal Pandya, Hardik Pandya and Kieron Pollard. If one of them suffers injury or is enduring bad form, Kiwi all-rounder Jimmy Neesham will come in the picture first. The team management might even include someone like Chris Lynn to strengthen their batting rather than giving the cap to inexperienced Arjun.

Hence, one of the bowlers will have to make way if Arjun gets his maiden IPL cap. In MI’s first two games this season, Jasprit Bumrah, Trent Boult, Rahul Chahar and Marco Jensen occupied the final four spots. Further, the likes of Nathan Coulter-Nile, Piyush Chawla, Dhawal Kulkarni and Adam Milne are warming the benches. Hence, it’s highly unlikely that Arjun will get a cap in IPL 2021.

The only situation where Arjun can likely get the chance is if MI confirm their place in the top two before completing their quota of games.  If one may recall, the Men in Blue & Gold rested many of their key players in their last league-stage game the previous season. Hence, if the five-time champions put up a similar show in IPL 2021, the Junior Tendulkar might get a place in the first XI.

(The above story first appeared on LatestLY on Apr 17, 2021 12:59 PM IST. For more news and updates on politics, world, sports, entertainment and lifestyle, log on to our website latestly.com).