With six wins in eight games, the Rishabh Pant-led Delhi Capitals were leading the team standings in IPL 2021, and a confirmed place in the playoffs was just a couple of victories away. However, BCCI had to postpone the competition indefinitely after many participating players contracted the COVID-19 virus. 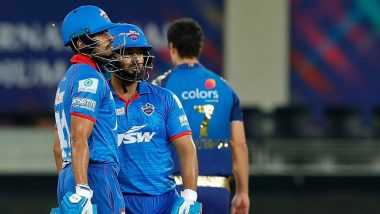 As Delhi Capitals were enjoying a sensational campaign in VIVO Indian Premier League (IPL) 2021, the suspension of the tournament would have left the side disappointed. With six wins in eight games, the Rishabh Pant-led side was leading the team standings, and a confirmed place in the playoffs was just a couple of victories away. However, the Board of Control for Cricket in India (BCCI) had to postpone the competition indefinitely after many participating players contracted the COVID-19 virus. While the decision was a need of the hour, DC would call themselves unfortunate as they were on a roll this season. IPL 2021 Suspended: Rajasthan Royals Are Most Profited Team with the Tournament Postponed, Here’s Why.

However, the postponement of IPL 2021 can be a blessing in disguise for the Delhi-based franchise. Yes, you read it absolutely right! The resumption of the tournament after few months will mean their regular skipper Shreyas Iyer will be back in action. For the unversed, Iyer was ruled out of IPL 2021 due to a shoulder injury that he sustained during India vs England ODI series in March. The right-handed batsman needed at least a four-month rest. Hence, if the competition resumes after July, which is most likely to be, Iyer can join DC.

However, the biggest question arises whether Iyer will replace Rishabh Pant as captain? Fortunately or unfortunately, the answer is most likely to be yes. Iyer has done a tremendous job after taking over the reins of the Delhi side midway in the 2018 season. While he took DC to playoffs in IPL 2019, the side played their first final last season, where they lost to Mumbai Indians in the summit clash. Although Pant has made a statement by guiding DC to six victories in eight outings, many fans and experts reckon that the 23-year-old wicket-keeper still needs grooming when it comes to captaincy.

Hence, Iyer should lead Delhi if IPL 2021 resumes after he attains full fitness. Notably, the dasher’s return will allow DC to field their best combination. In Iyer’s absence, Ajinkya Rahane and Steve Smith batted at number three for Delhi, but none of them have made a mark. Hence, the right-handed batsman will undoubtedly strengthen the side’s batting line-up. Moreover, his inclusion will allow Chris Woakes or Anrich Nortje to partner Kagiso Rabada in the bowling department.

Notably, R Ashwin had also pulled out of the tournament midway citing COVID-19 concerns. However, he’s also likely to be a part of the team when the season resumes. Hence, all sides should buckle up as the already formidable Delhi team will restart their campaign with an even stronger line-up.

(The above story first appeared on LatestLY on May 04, 2021 09:10 PM IST. For more news and updates on politics, world, sports, entertainment and lifestyle, log on to our website latestly.com).