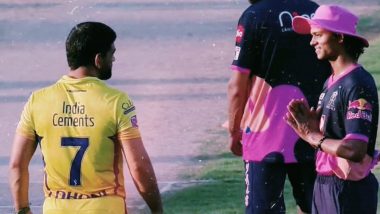 The respect MS Dhoni commands in world cricket is no for everyone to see. It is apparent, that in Indian the respect doubles up. At the start of the Rajasthan Royals vs Chennai Super Kings (CSK) IPL 2020 match at the Sharjah Cricket Stadium, youngster Yashasvi Jaiswal walked upto the veteran cricketer and greeted him with namaste. The respect for a senior was very much visible on Yashasvi’s face as he folded his hands after a fist bump with the legendary cricketer. Sanju Samson Slams Joint-Fastest IPL Half-Century Against Chennai Super Kings During RR vs CSK IPL 2020 in Sharjah, Netizens Hail Rajasthan Royals Wicket-Keeper Batsman.

Yashasvi is one of the upcoming talents is part of the Rajasthan Royals team. The left-handed batsman was handed his IPL debut tonight. Ahead of the IPL 2020 at the players’ auction, Yashasvi was bought for whopping Rs 2.4 crores by Royals. Ruturaj Gaikwad Quick Facts: Here’s All You Need to Know About the 23-Year-Old CSK Batsman.

The youngster, however, didn’t have a great outing with the bat. Opening the innings, Yashasvi scored just six runs before he was caught in the third over of RR’s innings. Royals eventually posted mammoth 216 for seven after Sanju Samson’s 32-ball 74 and Steve Smith’s 69. Jofra Archer helped RR cross the 200-run mark with an 8-ball cameo as he scored 27.

(The above story first appeared on LatestLY on Sep 22, 2020 11:05 PM IST. For more news and updates on politics, world, sports, entertainment and lifestyle, log on to our website latestly.com).