Argentina vs Brazil Head-to-Head Record: Take a Look at Who Dominates This Epic South American Rivalry Ahead of Their FIFA World Cup 2022 CONMEBOL Qualifier Match

Argentina take on already-qualified Brazil and after a win over Uruguay in their last match, Lionel Scaloni's are closer to booking a ticket to Qatar. It would be interesting to see who comes out on top in this top-of-the-table clash. 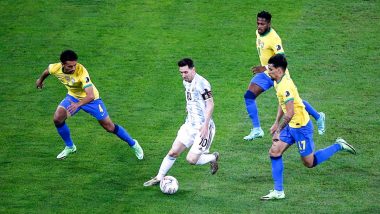 It's Argentina vs Brazil time and football fans all over the world are buzzing at the very thought of watching these two sides go up against each other in what promises to be a riveting FIFA World Cup 2022 CONMEBOL qualifier. No matter what stage and what time, Argentina vs Brazil is a fixture that no football fan wants to miss and it would be no different this time. With Lionel Messi set to play as confirmed earlier, Argentina football fans would be fantasizing the thought of the five-time Ballon d'Or pulling up a masterclass against Brazil, who would be without their star player, Neymar. His absence though does not make them less competitive and it would be interesting to see who comes out on top this time. Argentina vs Brazil Live Streaming Online 2022 FIFA World Cup Qualifiers CONMEBOL: Get Free Live Telecast of Football Match With Time in IST

With an array of stars lining up to take part in what is considered to be one of the biggest fixtures in South American football, let us take a look at the head-to-head record between these two sides.

Brazil hold the upper hand when it comes to head-to-head records between both sides. In a total of 113 matches played, Neymar's side have won 46 matches. Argentina meanwhile have secured 41 wins and 25 matches have ended in draws. The last meeting between these sides, which was also in the FIFA World Cup 2022 CONMEBOL Qualifiers was suspended due to some Argentinian players breaching COVID protocols. Argentina won twice in the last two occasions when these sides clashed with each other. The most notable of them was the Copa America final earlier this year where a solitary Angel di Maria goal proved to be the difference. Messi finally got his hands on an international title with Argentina at the end of that game.  Argentina vs Brazil: Fit Lionel Messi IN, Neymar OUT for FIFA World Cup 2022 Qualifiers – Check Kick-Off Time

Both sides have plenty of big-match players who can make a difference in this game. Apart from Neymar, Brazil also would miss Roberto Firmino with injury. For Argentina, Leandro Paredes is likely to be unavailable as well.

(The above story first appeared on LatestLY on Nov 16, 2021 09:33 PM IST. For more news and updates on politics, world, sports, entertainment and lifestyle, log on to our website latestly.com).