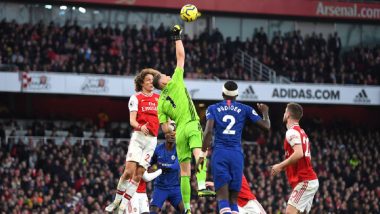 Not many expected London clubs Arsenal and Chelsea to be playing the FA Cup final given the young squad they posses and the presence of two Manchester giants in the semis of the competition. But the two clubs are here and raring to lay their hands on a coveted trophy. Arsenal have had a disastrous run in the Premier League season gone by as they finished 8th in the points table. Mikel Arteta has come in and done a commendable job of stabilising the squad but a lot needs to be done still. In contrast, Frank Lampard’s Chelsea have qualified for next season’s UEFA Champions League and upbeat going into the finals. Arsenal versus Chelsea will be telecasted on Sony Ten 2 from 10:00 pm IST. Chelsea vs Arsenal FA Cup Final 2020: All Our Energy is Going to Be on Winning That Trophy, Says Mikel Arteta.

Bernd Leno is out for Arsenal along with the likes of Gabriel Martinelli, Shkodran Mustafi and Calum Chambers which leaves the Gunners a bit light particularly in the backline. David Luiz put in a world-class performance against Manchester City in the semi-final but the Brazilian’s inconsistency means no one can be sure how he performs on the day. Alexandre Lacazette and Pierre Emerick Aubameyang are two potent weapons going forward for Arsenal but will need the supply line from Dani Ceballos to be on song.  ARS vs CHE Dream11 Prediction in FA Cup 2019–20 Final.

The return of French midfielder N’Golo Kante has given Frank Lampard a massive boost ahead of the final. He will line up alongside Mateo Kovacic with Jorginho making way for the 2018 World Cup winner. Olivier Giroud has been in great form lately and there is no looking past him as the choice for a lone striker. Mason Mount and Christian Pulisic are being touted as the future of the Blues and playing in a major final at such a young age bears testimony to the potential they have.

Where to Watch Arsenal vs Chelsea, FA Cup 2019-20 Final Football Match on TV?

Sony Sports are the official broadcasters of FA Cup 2019-20 in India. Fans can tune into Sony Ten2, Sony Ten 2 HD, Sony Ten 3, Sony Ten 3 HD to catch the live-action of Arsenal vs Chelsea on TV.

How to Get Free Live Streaming Online of Arsenal vs Chelsea, FA Cup 2019-20 Final Football Match?

FA Cup 2019-20 final can be viewed online on OTT platform SonyLiv. Fans can either log into the SonyLiv App or Website to get the live streaming of Arsenal vs Chelsea. Arsenal’s shaky defence means they will likely go down against Chelsea who are on course to win yet another trophy despite talks of their decline season after season.

(The above story first appeared on LatestLY on Aug 01, 2020 05:30 PM IST. For more news and updates on politics, world, sports, entertainment and lifestyle, log on to our website latestly.com).