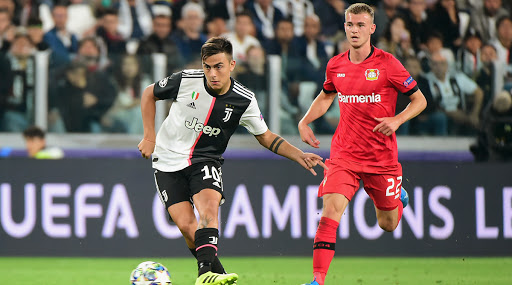 Bayer Leverkusen vs Juventus, UEFA Champions League Live Streaming Online: Juventus have been off the boil in their last two games at home and immediate return to form will be on the agenda of Maurizio Sarri’s side when they take on Bayer Leverkusen. With the Italian champions already through to the next round, the game is a dead rubber but Bianconeri’s poor form has added significance. Bayer Leverkusen are currently third in the points table with 6 points. With just a point separating them from second-placed Atletico Madrid, the German club has all to play for if they are to qualify for the round of 16. Fans searching for live streaming of Leverkusen vs Juventus UCL 2019-20 match can scroll below for more details. Ansu Fati Becomes Youngest Goal-Scorer in Champions League History During Inter Milan vs Barcelona Clash.

The absence of Mitchell Weiser and Joel Pohjanpalo is a big blow to the hosts while Nadiem Amiri is suspended. Kevin Volland will lead the Bayer line-up in the final third and will be flanked by Kai Havertz and Leon Bailey. The duo is blessed with exceptional pace and ability on the ball that can help the home side stretch Juventus. Chilean international Charles Aranguiz has to stamp his authority in the midfield which is not an easy thing to do against Juventus. Mohamed Salah Scores From Tight Angle Against RB Salzburg in UEFA Champions League 2019–20, Twitterati Hail Egyptians Strike (Watch Video).

Sami Khedira and Douglas Costa have been ruled out of the trip to Germany due to knee and hamstring injury respectively. Aaron Ramsey has been injured for majority of the season which is disappointing for the Welsh midfielder. He will likely miss the Bayer game too as he continues his full recovery. Cristiano Ronaldo will start upfront with either of Paulo Dybala or Gonzalo Higuain lining up alongside the Portuguese skipper. Miralem Pjanic in a deep-lying playmaker role remains Juventus’ best bet at gaining control of the game.

Bayer Leverkusen vs Juventus Group D match in the 2019-20 Champions League will be played on December 12, 2019 (Thursday) and will take place at the BayArena in Leverkusen. LEV vs JUV Group D UCL encounter is scheduled to start at 01:30 am IST (Indian Standard Time).

You can also follow the Bayer Leverkusen vs Juventus match on online platforms. Sonyliv, which is the official online media streaming platform of Sony Network, will be live streaming LEV vs JUV Group D encounter of 2019-20 UEFA Champions League matches for its online fans in India. Fans can also follow LatestLY for the live-score updates of Bayer Leverkusen vs Juventus and other UEFA 2019-20 Champions League matches.

Juventus lost their first game of the season at the weekend and they will try their best to come up with the perfect response. Bayer Leverkusen will score but don’t look like winning the match.