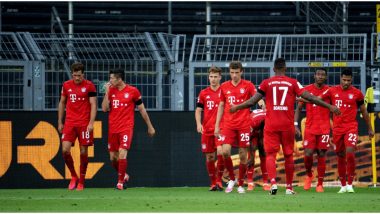 Bayern Munich begin the new footballing season where they left off, scoring goals for fun. In the Bundesliga 2020-21 opener on Friday, the Bavarians thumped Schalke 8-0 at the Allianz Arena. Serge Gnabry once again was among the goals as the young German netted a hat-trick while Leroy Sane impressed on his debut for the club, scoring one and assisting another two. Hansi Flick’s men have made their intentions clear in the very first game of the season. Robert Lewandowski Bids Adieu to Thiago Alcantara as the Spanish Midfielder Makes a Move to Liverpool.

The new Bundesliga season kicked off with a clash between Bayern Munich and Schalke with the record champions thrashing the side from Gelsenkirchen. The Bavarians got off to a great start as Serge Gnabry found the net after just four minutes and the lead was doubled by former Schalke man Leon Goretzka.

Last season’s top-scorer Robert Lewandowski got on the scoresheet with a penalty, becoming the first player to score in 10 successive Bundesliga appearances. Serge Gnabry then scored twice from Leroy Sane’s assists, who also capped off his sensational debut with a goal. Thomas Muller got among the goals as well as he got on the end of Lewandowski’s ‘rabona’ cross.

Schalke, who haven’t won in the league since January, were given a reality check in their very first competitive game of the season. The one-sided win stretched the Bavarian’s unbeaten run to 31 games this year, having now won the last 22 matches in a row.

The game was held behind closed doors despite Bundesliga allowing fans to attend matches, giving necessary protocols are maintained. But due to the rising coronavirus cases in Munich, the match was played without home supporters.

(The above story first appeared on LatestLY on Sep 19, 2020 08:44 AM IST. For more news and updates on politics, world, sports, entertainment and lifestyle, log on to our website latestly.com).