Bundesliga Chief Christian Siefert Takes A Jibe at Erling Haaland, Says ‘If Haaland Is So Good Then Why Is He at Dortmund?’ 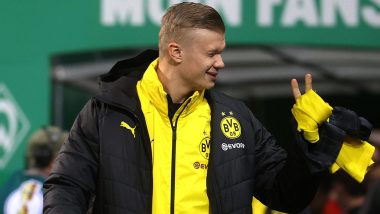 When the world is going gaga over Borussia Dortmund’s prodigy Erling Haaland, Bundesliga Chief Christian Siefert has taken a jibe at the 19-year-old. The Bundesliga Chief went on to say if the 19-year-old is so good, then why is he at Dortmund. However, he was all praises for the team for signing him. Erling Haaland has been heavily linked with Manchester United and in a recent interview, the Bundesliga Chief was asked if Haaland leaving Dortmund would create a negative impact on the league. Initially, he appeared to praise Haaland, but later he took a jibe at the player. Erling Haaland Breaks Cristiano Ronaldo & Lionel Messi’s This Record During Borussia Dortmund vs Shalke, Bundesliga 2019-20.

Siefert said, “Any great player leaving is a loss. But I'll ask you if he's so good then why is he at Dortmund?" He also went on to say that it is easy to admire a player when he has caught the attention of the world but it’s hard to sign him before that happens. He praised Borussia Dortmund for doing a great job of signing the player. Haaland was in the news for breaking Cristiano Ronaldo and Lionel Messi's record for being younger than them for scoring 40 goals in one season.

With a goal during Borussia Dortmund vs Shalke, the Norwegian player at the age of 19 years has now scored 41 goals this season, nine months and 23 days. Ronaldo was 23 years, three months and six-day-old when he netted 42 goals. Cristiano Ronaldo achieved this feat in 2007-08 while he was still playing for Manchester United. Barcelona’s Lionel Messi was 22 years, 10 months and six days old when he scored 41 goals for Barcelona.

(The above story first appeared on LatestLY on May 23, 2020 01:26 PM IST. For more news and updates on politics, world, sports, entertainment and lifestyle, log on to our website latestly.com).