Ronaldo performed his trademark 'SIUUU' celebration after scoring his second goal against Arsenal but he reportedly injured himself in the process as Manchester United are set to be without him in their Premier League game against Crystal Palace. Ronaldo completed 800 career goals in that game. 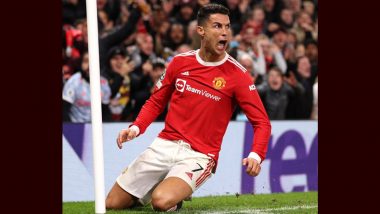 Cristiano Ronaldo's presence in Manchester United's next Premier League 2021-22 match is under doubt after he reportedly injured himself during the match against Arsenal. Ronaldo who is generally a fit football star, sustained an injury to his knee while he was performing his iconic 'SIUUU' celebration after scoring from the penalty spot in United's 2-1 win over Arsenal. He is thus reported to be under doubt for Manchester United's clash against Crystal Palace, which would also be Ralf Rangnick's first game in charge at Old Trafford. Cristiano Ronaldo Smirks at Fans After Old Trafford Goes Berserk Chanting His Name Post 800th Goal During Manchester United vs Arsenal, EPL 2021-22

It was Ronaldo's brace that won his side their second match in three games under caretaker manager Michael Carrick, who was given charge of the side following the dismissal of Ole Gunnar Solskjaer. The Portuguese star was replaced in the 90th minute by Anthony Martial and the five-time Ballon d'Or winner was seen rushing down the Old Trafford tunnel.

Ronaldo nonetheless, would be an integral part of Rangnick's era at United as the German coach was full of praise for the forward.

"When you see Cristiano yesterday in the second half, at the age of 36, amazing. Top professional. At his age, I have never seen a player who is still so physically fit. He is still a player who can easily make the difference. It is about how we develop the whole team, not only Cristiano," Rangnick, as quoted by Sport Bible, said. Jadon Sancho & Other Members of Manchester United Pull off Cristiano Ronaldo’s SIUUU Celebration After CR7’s Goal Against Arsenal, EPL 2021-22 Match (Watch Video)

"What I saw from Cristiano yesterday, he is more than willing to put his input into the team and his teammates will do the same," he added. Ronaldo, who is known as one of the fittest footballers on the planet, has hardly missed matches owing to injury but this time, he is set to sit out of the Crystal Palace game--if reports are to be believed--due to an injury which he suffered while celebrating. It can be bizarre but it seems true at the moment. The absence of Ronaldo is a big one but United would rely on Jadon Sancho and other youngsters to make up for the Portuguese' absence.

(The above story first appeared on LatestLY on Dec 04, 2021 08:21 PM IST. For more news and updates on politics, world, sports, entertainment and lifestyle, log on to our website latestly.com).