Cristiano Ronaldo or Mason Greenwood? Ralf Rangnick Reportedly Picks His Side in the Manchester United Locker Room Ahead of Aston Villa EPL 2021-22 Clash

Rangnick sees Greenwood as 'expendable'. It is said that there has been unrest in the Manchester United dressing room particularly after their 5-0 loss against Liverpool. Ronaldo had reportedly questioned the juniors in the dressing room after their defeat. 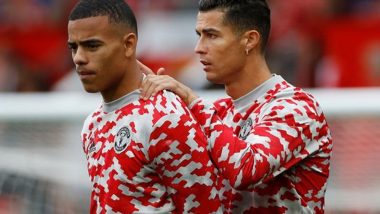 For a while now there have been reports of things not being good in the Manchester United camp. The reports of a feud between Cristiano Ronaldo and Mason Greenwood have grabbed headlines and it is said that the latter does not pass the ball to the Portugal star even when unmarked. Now, these reports have been floating on the Internet for a while now. Now according to the latest reports, the manager has picked his side between the two stalwarts.  The German is apparently gone with Cristiano Ronaldo as claimed by the newspaper Guardian earlier this week. Cristiano Ronaldo Could Play Alongside Lionel Messi at PSG, CR7 Likely to Replace Kylian Mbappe at French Outfit: Reports.

Rangnick sees Greenwood as 'expendable'. It is said that there has been unrest in the Manchester United dressing room particularly after their 5-0 loss against Liverpool. Ronaldo had reportedly questioned the juniors in the dressing room after their defeat. Ronaldo had earlier spoken about the way of understanding the psyche of the footballer. As quoted by DAZN via The Telegraph, Ronaldo said, “I don’t mean only in football, this new generation since probably 1995 they are thinking different. The life, the football, the struggles, this has to come from inside of you. You have to accept some times that you don’t agree with."

As of now, it is widely reported that Cristiano Ronaldo is unhappy at the Red Devils and he could be looking out for newer clubs.  Earlier we told you that he could play alongside his arch-rival Lionel Messi if everything falls in place. Manchester United will take on Aston Villa in EPL 2021-22 match.

(The above story first appeared on LatestLY on Jan 12, 2022 03:17 PM IST. For more news and updates on politics, world, sports, entertainment and lifestyle, log on to our website latestly.com).