England vs Austria, UEFA Women's Euro 2022, Live Streaming Online & Match Time in IST: How to Get Live Telecast of ENG vs AUT on TV & Free Football Score Updates in India

Hosts England would aim for a good start to the competition against Austria. Manchester's Old Trafford would host this game. Continue reading to get live streaming and telecast details of the match. 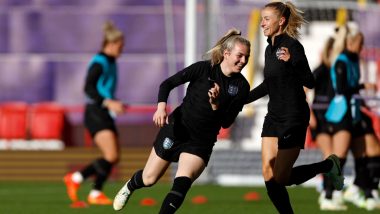 Hosts England would aim to have a flying start to the UEFA Women's Euro 2022 when they take on Austria in the first match of the competition on July 7, Thursday. The match would be played at the iconic Old Trafford stadium and is scheduled to get underway at 12;30 am IST (Indian Standard Time). Sony Sports network would provide live telecast of this match for fans in India. Manisha Kalyan, Midfielder, Signs for Apollon Ladies FC, Set To Become First Indian Player To Compete in UEFA Women’s Champions League

The competition was scheduled to take place last year but had to be postponed due to the COVID-19 pandemic. Now that it's here, fans can once again witness intense rivalries getting reignited in this quest for continental supremacy. Having finished runners-up twice, England would hope to all the way this time and a good start against Austria is exactly what they would be after. Austria on the other hand would seek a win in this game, something that would give them a huge confidence boost going ahead into the tournament.

England vs Austria clash in UEFA Women’s Euro 2022 will be played at the Old Trafford Stadium in Manchester on July 07, 2022 (Thursday). The game has a scheduled time of 12:30 am IST (Indian Standard Time).

Where To Watch Live Telecast of England vs Austria, UEFA Women’s Euro 2022 Match on TV?

Sony Pictures Network are the official broadcasters of UEFA Women’s Euro 2022 in India and will telecast the games live on its channels. Fans can tune into Sony Sports HD/SD channels to watch the live telecast of England vs Austria on TV.

Sony Pictures Network’s official OTT platform Sony LIV will be streaming the game live for its fans in India. You can tune into the Sony Liv app or website to watch England vs Austria, UEFA Women’s Euro 2022 live streaming online.

(The above story first appeared on LatestLY on Jul 06, 2022 08:17 PM IST. For more news and updates on politics, world, sports, entertainment and lifestyle, log on to our website latestly.com).