Cristiano Ronaldo will have to stay suffice with 31 goals and focus on Europe where Juventus host Lyon in the second leg of their Champions League round of 16 tie. Juventus trail Lyon 0-1 from the first leg and need to score twice to progress into the quarter-final. Juventus have not lifted the Champions League title since 1995-96. 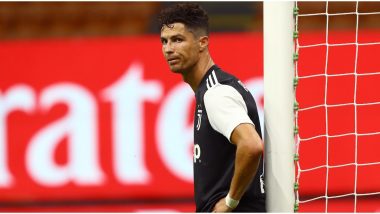 Cristiano Ronaldo was left out from Juventus’ squad for their final Serie A 2019-20 match against AS Roma. Juventus, who sealed their ninth successive Serie A title with a 2-0 win over Sampdoria two matches ago, will end their league campaign with a home match against AS Roma. But with the league title already sealed, manager Maurizio Sarri has set his sights on the Champions League and decided to rest both of his key players Ronaldo and Paulo Dybala to keep both fit and fresh. Ronaldo will, however, miss out on two big records after being excluded from the final matchday squad. Cristiano Ronaldo Left-Out of Juventus’ Squad for Final Serie A 2019–20 Match Against AS Roma; Twitterati React As Portuguese Forward Is Rested.

Ronaldo ends his second season in Italy with 31 league goals. The Portuguese forward has scored 31 goals in 33 matches in Serie A 2019-20 and was on course to fight Ciro Immobile for the ‘Capocannoniere’ award. He was four goals behind Immobile, who has scored 35 goals, with both Lazio and Juventus having one game to play each. Ronaldo, of course, had to score five goals and hope Immobile, whose side face Napoli in their final league match, not find the net. Juventus vs AS Roma, Serie A 2019–20: Cristiano Ronaldo, Edin Dzeko and Other Players to Watch Out in JUV vs ROM Football Match.

But Ronaldo is a goalscoring monster and has time and again shown he can rise up to the occasion. Ronaldo also found the net in each of Juventus’ meeting with AS Roma this season. Juventus beat Roma 2-1 in the reverse league fixture in January with Ronaldo scoring the second goal. They also met Roma in the Coppa Italia quarter-final and Ronaldo had opened the scoring on that night leading Juventus to a 3-1 win.

The 35-year-old will, however, end the current Serie A season on 31 goals with the ‘Capocannoniere’, awarded to the highest goalscorer in Italian top-flight, now guaranteed to go to Immobile. The Italian forward can also equal Gonzalo Higuain’ record of 36 goals in a single Serie A campaign. Higuain scored 36 goals for Napoli in 2015-16 and it is the most number of goals scored by a player in a single Italian top-flight campaign.

There is also a second record, an easier one, which Ronaldo will miss out after being rested for Juventus’ final Serie A 2019-20 match. The 35-year-old has scored 31 goals and needed one more goal to equal Felice Borel’s record of most goals scored for Juventus in a single Serie A campaign. Borel had scored 32 goals in the 1932-33 Serie A season and Ronaldo needed only one goal to equal that 88-year-old record.  A brace against Roma could have helped him break Borel’s record and etch his name in Juventus’ history forever.

But the five-time Ballon d’Or winner will have to stay suffice with 31 goals and focus on Europe where Juventus host Lyon in the second leg of their Champions League round of 16 tie. Juventus trail Lyon 0-1 from the first leg and need to score twice to progress into the quarter-final. Juventus have not lifted the Champions League title since 1995-96.

(The above story first appeared on LatestLY on Aug 01, 2020 09:14 PM IST. For more news and updates on politics, world, sports, entertainment and lifestyle, log on to our website latestly.com).