Chelsea have made an inquiry about Harry Maguire's availability river growing concern about his future at Manchester United following a dismal start to the new Premier League season. 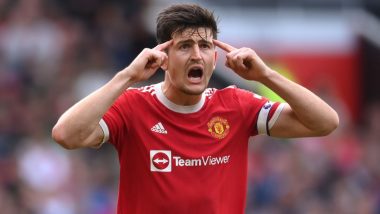 Chelsea are considering a shick move for Manchester United captain Harry Maguire as they look to strengthen their defence this summer. Thr England international has been one of the regular starters at Old Trafford since his arrival from Leicester City but has not been able to win over the fans with his performances. Thomas Tuchel Handed Touchline Ban For One Game After Fight With Antonio Conte in Premier League.

According to  report from the Daily Mail, Chelsea have made an inquiry about Harry Maguire's availability river growing concern about his future at Manchester United following a dismal start to the new Premier League season. Casemiro Transfer News: Real Madrid Midfielder Joins Manchester United on Four-Year Deal.

Harry Maguire hasn't been at his best in the opening two games of the season and his place for the upcoming clash against Liverpool is in doubt. Meanwhile, Chelsea consider him a viable alternative after struggling to land their primary target Wesley Fofana of Leicester City.

Manchester United are linked with Chelsea winger Christian Pulisic, who has struggles for game time under Thomas Tuchel, and the Blues consider this as a possible option to bring the Manchester United captain to London in a swap deal.

Chelsea's priority remains Wesley Fofana and there are indications that the deal might go through after the defender was left out of the squad for the game against Southampton. But the Blues are also seriously considering making a move for Harry Maguire with his place under Erik ten Hag being questioned.

Manchester United have lost their opening two games of the season and Ten Hag is looking to make changes to get a response from the team. Raphael Varane could start the game alongside Lisandro Martinez against Liverpool with Maguire demoted to the bench.

(The above story first appeared on LatestLY on Aug 20, 2022 09:10 AM IST. For more news and updates on politics, world, sports, entertainment and lifestyle, log on to our website latestly.com).