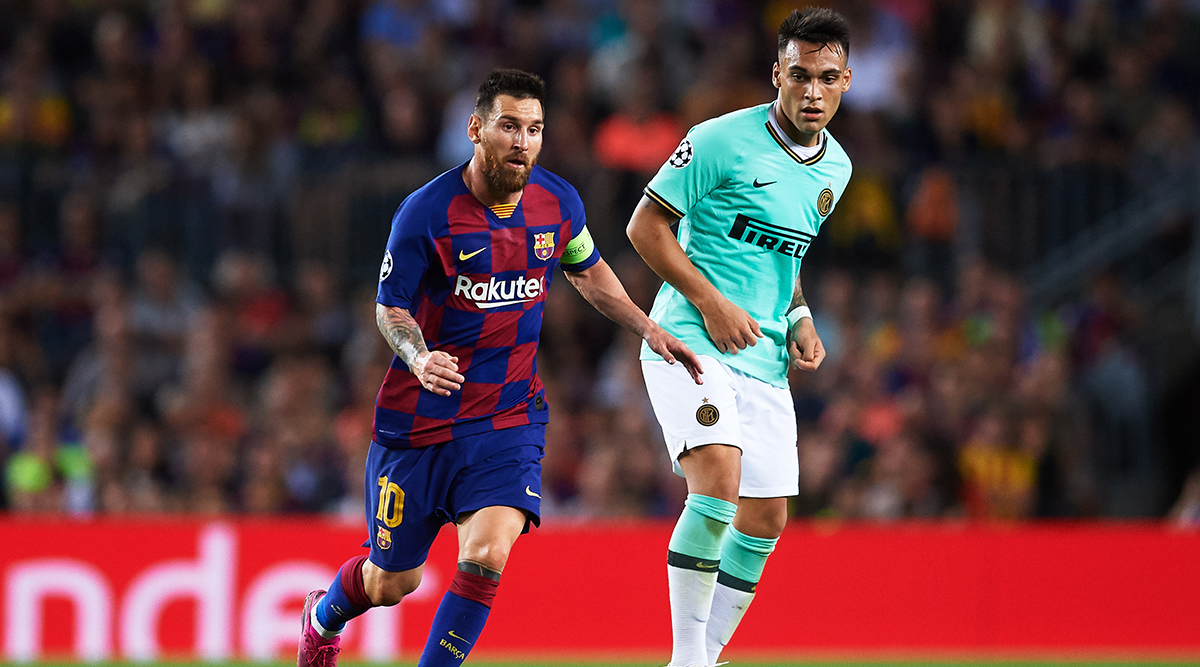 Inter Milan vs Barcelona, 2019-20 UEFA Champions League Live Streaming Online and Telecast: Barcelona have qualified for the round of 16 of the UEFA Champions League 2019-20 and play Inter Milan in their last group stage game. Inter Milan, who currently lead the Italian Serie A are second in Group F with 7 points. They are level on points with Borussia Dortmund which makes this contest a thrill a minute ride. The last time these two teams met, Luis Suarez had bagged a brace for Barcelona when they came back from a goal down to beat Inter 2-1. Inter Milan are known for their dominance in San Siro but Barcelona will not be pushovers despite them guaranteed a spot in the next round. Those searching for the live telecast, online live streaming and score updates of INT vs BAR Group F UCL encounter should scroll down for all information. Lionel Messi Out of Barcelona Squad Against Inter Milan in UEFA Champions League 2019–20, Riqui Puig Called Up.

Antonio Candreva and Kwadwo Asamoah are an integral part of Antonio Conte’s set up but the duo runs the risk of missing the game due to fitness issues. The back three of Stefan de Vrij, Diego Godin and Milan Skriniar oozes class and Conte will back on the trio to come good against Barcelona. Romelu Lukaku and Lautaro Martinez have a good understanding between them going forward but will need their midfielder to feed them with early passes.

Lionel Messi, Gerard Pique and Sergi Roberto have been rested by Ernesto Valverde for the trip to Milan. The absence of Lionel Messi means Antoine Griezmann will assume the playmaker role with Ansu Fati and Carles Perez starting out wide. Nelson Semedo is out injured which should give Moussa Wague an opportunity to start for the Catalonians. Carles Alena could also get a game in place of the dynamic Frenkie de Jong.

Inter Milan vs Barcelona encounter in 2019-20 UEFA Champions League will be played at the San Siro Stadium in Milan, Italy. The Group F match will be played on December 11, 2019 (Wednesday) and is scheduled to start at 01:30 am IST (Indian Standard Time).

Sonyliv, the official online media streaming platform of Sony Pictures Sports Network, will be live streaming the Inter Milan vs Barcelona Champions League 2019-20 encounter for its online fans in India. Fans can also follow LatestLY for live score updates of INT vs BAR UCL match and every other Champions League encounter. A second-string Barcelona side makes Inter Milan the favourites to secure a win and a place in the next stage of the Champions League tonight.