Is Cristiano Ronaldo Playing Tonight Against Germany in Euro 2020? Will CR7 be Part of Portugal’s Starting XI?

The Portugal forward looked to be in fine form in Portugal's Euro 2020 opener against Hungary. He would once again be raring to take the field and make a mark against Germany? 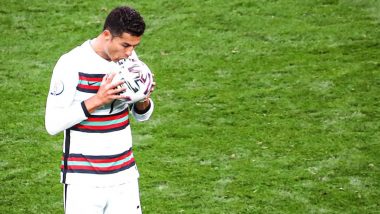 He had set the ball rolling with a record-breaking brace against Hungary, ensuring the fact Portuguese began their title defense in style. With that performance, Cristiano Ronaldo achieved the record of becoming the highest scorer in the history of European championships and come June 19, he would be licking his chops when he takes the field against Germany in their second Euro 2020 match. Since Portugal's last match, many things have happened, the most memorable of them being the Coca-Cola snub by the Portugal star, which caused the beverage company to lose USD 4 billion. Amidst all of that, a question somewhere might arise--is Ronaldo playing against Germany? Germany vs Portugal, UEFA Euro 2020 Live Streaming Online & Match Time in IST: How to Get Live Telecast of GER vs POR on TV & Free Football Score Updates in India

Well yes absolutely! The Portugal forward has seemed to be in the form of his life this season, scoring consistently for his club Juventus and then Portugal. He would expectedly be part of the playing XI tonight.  As a matter of fact, Portugal fans would be happy to remember one stat before this match--Ronaldo has scored nine goals against Manuel Neuer, which includes three braces and one hattrick, despite never playing in the same league as him. Ronaldo would be delighted to add to his tally and also score against Neuer for the first time in international colours.

Germany, who are already under the pump, having lost their opening match against France, would be happy to even walk away with one point today. Unless they pull off something special on their home turf. They too have some serious attacking talent but quite frankly, they haven't been the same since their group stage exit at the 2018 World Cup in Russia. All's left for us to see. Who would eventually come out on top? Will Manuel Neuer reinstate his status as the best goalkeeper in the world today, or will Ronaldo score his first international goal against the seasoned German stopper?

(The above story first appeared on LatestLY on Jun 19, 2021 08:27 PM IST. For more news and updates on politics, world, sports, entertainment and lifestyle, log on to our website latestly.com).