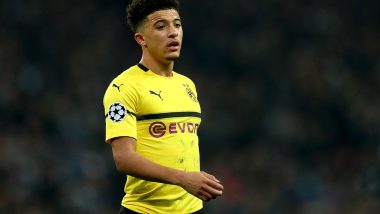 Jadon Sancho has told Borussia Dortmund he will remain dedicated and committed to the club if his proposed move to Manchester United doesn’t materialise this summer. Sancho has been constantly linked to the Red Devils and is also reported to have agreed personal terms with United and is eagerly waiting for both clubs to agree on a price to make the transfer possible. The 20-year-old is touted to join to take the No 7 shirt at Old Trafford if and when he joins the club. But Sancho might have to wait longer to find where he ends up this season. Manchester United Given Ultimatum by Borussia Dortmund to Sign Jadon Sancho.

Reports state that the United have refused to match Dortmund’s demand of £108million for the winger. The Red Devils are refusing to pay such a high amount while the Bundesliga club are not willing to lower their valuation. It has also been mentioned that the German club have given United a deadline to pay £108million transfer fee and complete the signing. Ole Gunnar Solskjaer Praises Manchester United Forward Anthony Martial, Says ‘He’s Physically at His Best Level’.

According to a report from German outlet Bild, Dortmund want United to act quickly if they are interested in signing this summer. The Bundesliga side have given the Red Devils an ultimatum of August 10 to pay the transfer fee. Dortmund will not sell after August 10 as they will start preparing for the next season from August 12.

Now according to a report from The Mirror, Sancho is eager to join United this summer but has told Dortmund that he will work with the same commitment even if a deal doesn’t breakthrough in this transfer window. The report mentions that Sancho told the club he will "work with the same dedication and commitment for the success of BVB" if the transfer doesn’t happen.

Sancho’s current contract at Dortmund runs until June 2022. The England international has scored 19 goals and made 19 assists in the recently concluded season. His assurance of working with the same commitment will certainly come as a big relief for Dortmund as they start preparing themselves in hope of winning some silverware next season.

(The above story first appeared on LatestLY on Aug 10, 2020 01:23 PM IST. For more news and updates on politics, world, sports, entertainment and lifestyle, log on to our website latestly.com).