Juventus vs Sampdoria Live Streaming Online & Match Time in IST: How to Get Free Live Telecast of Serie A 2020-21 on TV & Football Score Updates in India?

Matthijs de Light underwent shoulder surgery recently and will miss the start of the Juventus campaign. He joins the likes of Alex Sandro, Federico Bernardeschi and Paulo Dybala on the sidelines. Portuguese skipper Cristiano Ronaldo will line up alongside Dejan Kulusevski in a two-man forward line. 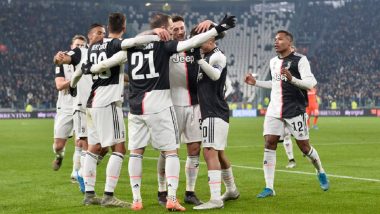 Juventus vs Sampdoria Free Live Streaming: The Andrea Pirlo reign at Juventus begins with a game against Sampdoria at the Allianz Arena. The Turin based club sacked Maurizio Sarri despite winning the league post the end of the 2019/20 campaign with the name of club legend Andrea Pirlo as the new gaffer creating shockwaves. Though he has little experience in managing a top-flight football club, Andrea Pirlo always has been a wonderful reader of the game and surely has the blueprint to take the club to glory. Sampdoria were involved in a relegation scrap in the last season and will be eager to improve. Juventus versus Sampdoria will be telecasted on Sony Ten network from 12:15 am IST. JUV vs SAM Dream11 Prediction in Serie A 2020-21: Tips to Pick Best Team for Juventus vs Sampdoria Football Match.

Matthijs de Light underwent shoulder surgery recently and will miss the start of the Juventus campaign. He joins the likes of Alex Sandro, Federico Bernardeschi and Paulo Dybala on the sidelines. Portuguese skipper Cristiano Ronaldo will line up alongside Dejan Kulusevski in a two-man forward line. Luis Suarez, who has been linked with a move to Turin looks unlikely to join and this is where the hosts can struggle. Arthur is in line to make his Juventus debut in a five-man midfield which will have Rodrigo Bentancur playing the anchor role.

Federico Bonazzoli will replace Manolo Gabbiadini up top for Sampdoria with the latter struggling with a groin problem. Veteran frontman Fabio Quagliarella should start as well in an attack-minded 4-4-2 formation for the visitors. Maya Yoshida at the heart of defence has a busy day at work with the likes of Ronaldo and company set to dominate at home. Albin Ekdal in midfield is known for his creativity and will be vital as the hope to play well on counter.

When is Juventus vs Sampdoria, Serie A 2020-21 Football Match? Know Date, Time and Venue

Where to Watch Live Telecast of Juventus vs Sampdoria, Serie A 2020-21 Football Match?

Sony Sports Network are the official broadcasters of Serie A 2020-21in India. So fans can tune into Sony Ten 2 and Sony Ten 2HD channels to catch the live-action of Juventus vs Sampdoria clash.

How to Get Free Live Streaming Online of Juventus vs Sampdoria, Serie A 2020-21 Football Match?

Juventus vs Sampdoria can be viewed online on OTT platform SonyLiv, the official streaming partner of Sony Sports Networks. So fans can tune into SonyLiv App or website to catch the live action of Serie A 2020-21matches. Juventus will dominate right from the word go and a 3-1 home wins the most likely result post the end of 90 minutes.

(The above story first appeared on LatestLY on Sep 21, 2020 12:07 AM IST. For more news and updates on politics, world, sports, entertainment and lifestyle, log on to our website latestly.com).