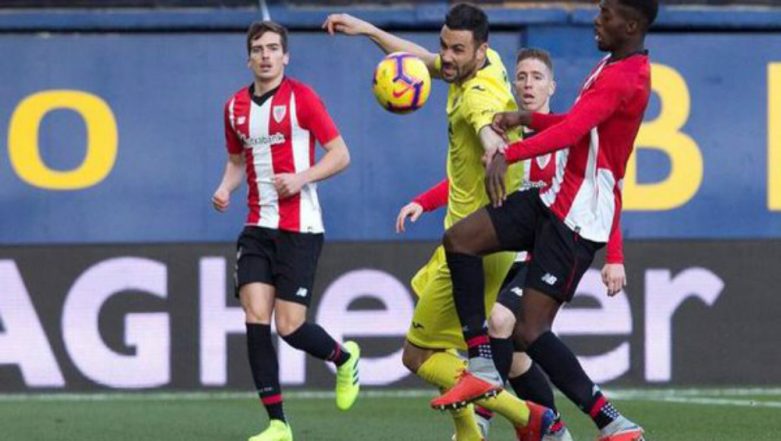 Vila-real, January 21: Athletic Club squandered an early lead and settled for a 1-1 draw against host Villarreal in La Liga action. Seeking a break away from the relegation zone, Villarreal tried to dictate the pace in the opening minutes on Sunday night, but the club came up short, reports Efe news.

On the other side of the field, Athletic Club put the home side under pressure, creating a golden opportunity on a shot by winger Ibai Gomez that hit the right post just five minutes into the game. Barcelona vs Getafe, La Liga: Leo Messi, Luis Suarez Lead Barca to 2-1 Win Over Getafe.

Athletic Club's effort was rewarded in the 17th minute, when Villarreal left back Jaume Costa inadvertently put a low cross from left back Yuri Berchiche home while trying to clear it.

Despite attacking midfielder Santi Cazorla's best efforts, Villarreal was unable to get past the Athletic defense until the first-half whistle.

Villarreal was in charge during the opening minutes of the second half and eventually drew level as Cameroonian forward Karl Toko Ekambi capitalized on a low cross sent into the area by winger Alfonso Pedraza in the 70th minute.

The goal boosted the drive of the two teams, which sought to take the lead. Athletic Club nearly took the lead with five minutes to go before the second half stoppage time, but the goal was disallowed after consulting the video assistant referee.

With the draw, Villarreal remains in the 19th and second-to-last spot in the La Liga standings, while Athletic Club temporarily climbed into 13th place, with 23 points, pending other matchday results.