Lionel Messi and team is preparing for the Super Copa match against Real Sociedad. The match will be held on January 14, 2021, and the fans are more than eager for the mouth-watering tie. Lionel Messi and his team were seen preparing for the tie and the official account of Barcelona shared the pictures and video of the players sweating it out for the contest. Ahead of the match, team Barcelona announced 21 member squad for the game. Barcelona squads include Antoine Griezmann, Lionel Messi, Samuel Umtiti, Jordi Alba and Mirlem Pjanic and others. Lionel Messi’s 5-Year-Old Son Celebrates His Wonderful Free-Kick Goal Against Granada, Wife Antonela Roccuzzo Shares Cute Video on Instagram.

The Real Sociedad squad will witness the return of defender Nacho Monreal for their Spanish Supercopa. The team will be looking out for revenge against the Catalan Giants as the last time Real Sociedad met Barca in the La Liga fixture. The team faced a 3-2 defeat. Now, let's have a look at the video of the practice session and the squad. 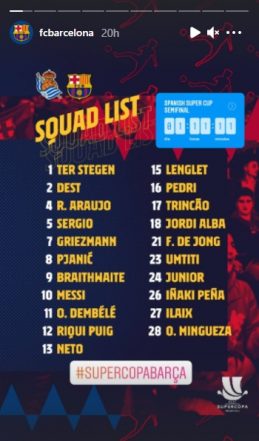 Picture from the practice session

Talking about team Real Sociedad, the team is suffering from an injury. David Silva and Aritz Elustondo are the ones who are doubtful for the contest owing to injuries. Philippe Coutinho, Gerard Pique, Sergi Roberto and Ansu Fati will remain unavailable due to an injury.

(The above story first appeared on LatestLY on Jan 12, 2021 04:22 PM IST. For more news and updates on politics, world, sports, entertainment and lifestyle, log on to our website latestly.com).