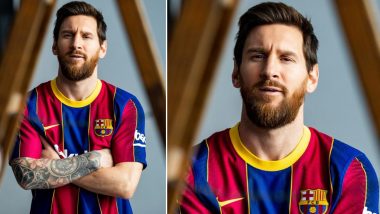 Barcelona on Tuesday unveiled their new home kit for the upcoming season which see them ditch the checkered pattern, used this campaign and got to traditional stripes. During the photo-shoot for the new jersey, Lionel Messi was present despite doubts surrounding the Argentine future. And as soon as the kit was revealed, fans unsurprisingly started pouring love over the Barcelona captain. Barcelona New Home Kit for 2020–21 Unveiled, Fans Reminisce About 2010–11 Treble Winning Season (See Pics).

The Jersey pattern is very much similar to Barcelona’s 2010-11 kit when the team won the first treble in the club’s history. It also contains small yellow lines, separating the old-fashioned red and blue stripes, which is reminiscent of the Spanish clubs’ jersey from the 1920s. I Could See Lionel Messi Playing in 2025, Easily, Says Luis Garcia.

During the unveiling of the new home kit, several first-team players such as Gerard Pique, Sergi Roberto, Sergio Busquests and Antoine Griezmann were present, but it was not a surprise that fans showered captain Lionel Messi with all their love, probably as an attempt to persuade him to sign a new contract and continue playing for the Blaugranas.

Yes. Absolutely. Now that I see it on Messi – glorious.

Now the next question is: are the away kits as sexy?

The 🐐 is looking fresher every year 👌🏻 https://t.co/ECenFWnMC9

Lionel Messi’s future with Barcelona has been a topic of debate in recent weeks as the moment as the Argentine reportedly rejected contract renewal talks. It is understood that the 33-year-old is unsatisfied with the way the club is being run at the moment.

The six-time Ballon d’Or winner has always been a silent person but this year, with the club’s evident decline, has made a decision to make his voice heard. Messi criticised the Barcelona board when players were blamed for the ‘pay-cut’ fiasco amid the coronavirus pandemic and was in a public feud with sporting director Eric Abidal after the sacking of Eric Abidal, who said Barcelona squad was one of the reasons for that decision.

(The above story first appeared on LatestLY on Jul 14, 2020 09:01 PM IST. For more news and updates on politics, world, sports, entertainment and lifestyle, log on to our website latestly.com).