With their first home loss in 15 months, Manchester City ended up stumbling into the quarterfinals of the Champions League. 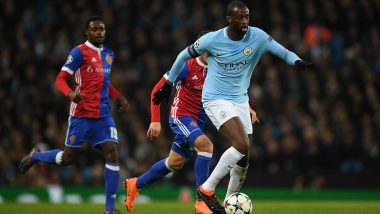 Manchester, Mar 8: With their first home loss in 15 months, Manchester City ended up stumbling into the quarterfinals of the Champions League. Not that Pep Guardiola was particularly bothered about a surprise 2-1 home loss to Basel.

"This kind of position is not going to happen in the quarterfinals, where you have a 4-0 (lead) from the first leg," the City coach said. "When it's scary to be (knocked) out, the rhythm will be completely different." Indeed, it was difficult to draw too many conclusions from what was only City's fourth loss of the season in all competitions.

A 4-0 win in Switzerland in the first leg three weeks ago made qualification almost a formality for a team that is 16 points clear in the Premier League and one of the favourites to win the Champions League.

Guardiola fielded a virtual reserve side at Etihad Stadium for the return match and making six changes from its previous game disrupted the fluency of the team's passing and pressing game.

City took the lead in the eighth minute through Gabriel Jesus in his first start in 2018, but Mohamed Elyounoussi equalized in the 17th and Basel regularly broke through the home side's midfield in the final hour of the game.

Wing-back Michael Lang earned Basel its latest victory over a Premier League giant by smashing a rising shot inside the near post through goalkeeper Claudio Bravo's attempted save in the 71st.

"You will find in all the clubs in the world," Guardiola said, "that when you make six changes, the team is not the same." Still, City's first home loss since a 3-1 defeat to Chelsea in the Premier League in December 2016 came as a surprise.

And it was something to savour for Basel, the Swiss champion that has been a scourge of English powers with wins over Manchester United, Chelsea, Liverpool and Tottenham in European competition since 2011.

"We have a certain pride," Basel coach Raphael Wicky said, "and against a team that plays every three days and is beating everyone, it's very special."

City advanced 5-2 on aggregate and became the second English team through to the quarterfinals, after Liverpool from Tuesday.

Tottenham couldn't make it three, though, losing 2-1 to Juventus at Wembley Stadium as the Italian side clinched a 4-3 aggregate victory. Gonzalo Higuain and Paulo Dybala scored goals in the space of three minutes as Juventus came from behind following Son Heung-min's opener.

There are still chances for Premier League sides Manchester United and Chelsea next week.

With qualification all but secured from the first leg, Guardiola played many of his fringe players -- like 34-year-old Yaya Toure and a player half his age, English prodigy Phil Foden -- and it showed at times.

According to football data supplier Opta, City completed 978 passes -- the most recorded by a side in a Champions League match since Opta began compiling stats in 2003-04. Many of those passes lacked penetration, though.

"To just pass for itself is nothing," Guardiola said. "The second half was really, really poor."

Jesus worked hard in his first start since a serious knee injury sustained on Dec. 31 but he was understandably rusty, the ball sometimes not sticking when it was played into him.

The Brazil striker was in the right place at the right time for his goal, though, tapping in from close range at the far post from Bernardo Silva's low, teasing cross. It was his first goal in his last 14 appearances.

It was from one of those regular breaks in behind Toure that Basel scored its equaliser, with Blas Riveros' cross deflecting off John Stones into the path of Elyounoussi, who drove home a shot from 10 meters. Elyounoussi played a key role in the winning goal, slipping the ball through for Lang to fire home from an acute angle. UEFA Champions League 2017-18 Schedule: Complete Fixtures, Match Time, Results of Round of 16 Football Matches.

City is in the Champions League quarterfinals for only the second time. "Maybe people will think the way we played today, we are not able to fight to go through. We will see," Guardiola said.