Manchester City will be aiming to lift the first-ever Champions League trophy in their history. A semi-final appearance was their best finish in the competition but after several heartbreaks, Pep Guardiola has eventually led his team to Europe’s showpiece event and will be looking to get his team over the line. 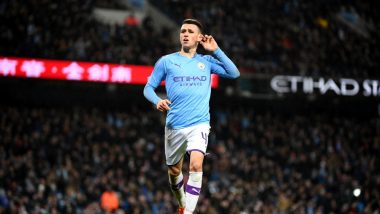 Phil Foden of Manchester City celebrates after scoring his team's fourth goal during the FA Cup Third Round match between Manchester City and Port Vale at Etihad Stadium on January 04, 2020 in Manchester, England. (Photo Credits: Getty)

Manchester City and Chelsea will face each other in the final of UEFA Champions League 2020-21. The summit clash will be played at the Estadio do Dragao Stadium in Porto, Portugal on May 29, 2021 (Saturday). Both teams have quality players at their disposal, capable of changing the game at any given point and will be aiming to end the season with a European trophy. So ahead of the UCL 2020-21 final, we take a look at key players from Chelsea and Manchester City. UEFA Champions League 2020-21 Winner Predictions: Who Are the Favourites To Win UCL Trophy?

Manchester City will be aiming to lift the first-ever Champions League trophy in their history. A semi-final appearance was their best finish in the competition but after several heartbreaks, Pep Guardiola has eventually led his team to Europe’s showpiece event and will be looking to get his team over the line. N'Golo Kante, Edouard Mendy Fit and Available For UEFA Champions League Final Against Manchester City.

Meanwhile, Chelsea will be looking to out the demons of FA Cup final defeat behind them and once again look to become the top team in Europe by winning the elusive Champions League title. The Blues has won the competition in 2012. So ahead of the game, here are some players who can have a huge impact on the game.

The Belgian has suffered from injuries this season but has been playing consistently in recent matches and will be looking to be the main creator for the star-studded attacking unit of Manchester City.

The Chelsea youth academy product has had a sensational season so far and has been the player of the season for the Blues. The youngster will need to be at his best of Chelsea are to lift the trophy for the first time since 2012.

The Portuguese defender has been a revelation for Manchester City and has improved their backline considerably. The 23-year-old will have a huge responsibility in stopping the Chelsea attackers, who are likely to play in the counter.

The German international has struggled to find the net consistently in his first season in London but has the trust of his manager. Despite his lack of goals, Werner will pose a great threat to Man City’s defence due to his pace and intelligence.

Another talented English youngster, who will be on display in the finals and will have huge responsibilities on his shoulders. Foden has done well to establish himself in a Man City team full of superstars and need to be at his best to take his team over the line.

(The above story first appeared on LatestLY on May 29, 2021 05:01 PM IST. For more news and updates on politics, world, sports, entertainment and lifestyle, log on to our website latestly.com).