Both the goalkeepers Gianluigi Donnarumma (AC Milan) and Joel Pereira (Manchester United) were at their acrobatic best to deny goals to their opponents. 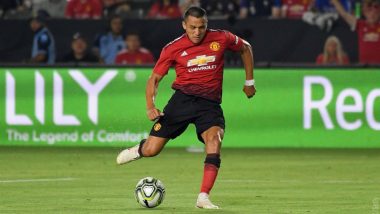 It took 26 spot kicks to determine the winner between Manchester United and AC Milan, in an International Champions Cup match on Thursday. The interesting game ended in 1-1 draw, and what followed it was an epic penalty shootout. Milan’s Franck Kessie missed the decisive penalty, which resulted in a win for Jose Mourinho’s team 1-1 (8-9 on penalties).

The exciting contest saw United’s Alexis Sanchez score the opening goal of the match. Sanchez, who was in top form, scored the goal in the 12th minute, giving the Red Devils an early lead in the game.

However, their happiness was short-lived as Milan’s Suso scored an equaliser soon after. Suso scored a brilliant goal in the 15th minute which saw Milan neutralise United’s lead in the match.

Both the teams fought tooth and nail to score the winning goal in the match. The closest to score the second goal was Milan’s Nikola Kalinic, whose close-shot hit the goal post in the ending moments of the match. The game, eventually, ended in a draw after the injury time, and then the epic penalty shootout took place.

Both the goalkeepers Gianluigi Donnarumma (AC Milan) and Joel Pereira (Manchester United) were at their acrobatic best to deny goals to their opponents. One can only imagine as to what would have been going through the minds of the goalkeepers during the scintillating penalty shootout.

Manchester United won the match 1-1 (8-9 on penalties) and will now face Liverpool on Sunday, i.e. July 29. On the other hand, AC Milan will be facing Tottenham Hotspur in their next match which is scheduled to take place on Wednesday, i.e. August 1. Stay tuned with us for all the latest updates about International Champions Cup!

(The above story first appeared on LatestLY on Jul 27, 2018 09:22 AM IST. For more news and updates on politics, world, sports, entertainment and lifestyle, log on to our website latestly.com).