Manchester United vs Chelsea, FA Cup 2019-20: Bruno Fernandes, Christian Pulisic And Other Players to Watch Out for Ahead of Semi-Final Clash

Manchester United are a team reborn since the turn of the year and their form has improved even further post lockdown. Solskjaer’s men are on a 19-game unbeaten run and most of it is down to their goal-scoring prowess. Chelsea, similar to their early season form, have been inconsistent since football’s restart as brilliant performances are followed by below-par displays. 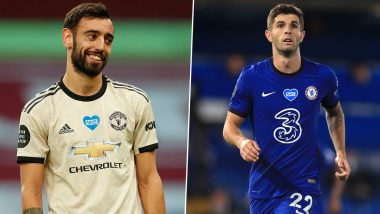 Manchester United will take on Chelsea in the semi-finals of the 2019-20 FA Cup. The clash will be played at the Wembley Stadium on July 19, 2020 (Sunday). Both the teams have met thrice this season and on each occasion, Ole Gunnar Solskjaer’s men have prevailed. So Frank Lampard and his team will have a point to prove in this game and take a step towards the first trophy of the season. Manchester United vs Chelsea, FA Cup 2019–20 Live Streaming on SonyLiv.

Manchester United are a team reborn since the turn of the year and their form has improved even further post lockdown. Solskjaer’s men are on a 19-game unbeaten run and most of it is down to their goal-scoring prowess. The front three of Mason Greenwood, Anthony Martial and Marcus Rashford have scored the bulk of their goals and will be eager to keep that run going. MUN vs CHE Dream11 Prediction in FA Cup 2019–20 Semi-Final.

Meanwhile, Chelsea, similar to their early season form, have been inconsistent since football’s restart as brilliant performances are followed by below-par displays. Defensive lapses have cost Lamapard’s side some crucial points but they will be watchful of repeating such mistakes against a United side who can punish teams at any given moment.

So ahead of this all-important clash, we take a look at few players who could have a huge say on the final outcome.

The Portuguese midfielder has been the turning point in Manchester United’s season as his arrival has woken up a sleeping giant. Fernandes has been involved in a goal in each of his last five games, scoring four and assisting five times. His creativity will be crucial if the Red Devils are to open up the Chelsea defence

The American has been a player reborn post lockdown. Pulisic has been the main creator of goals for Chelsea in recent matches and will once again be their main man. The young winger has played in every game since the restart and is expected to start this game as well and trouble the United backline with his pace and trickery.

The Frenchman has been the most impressive of the United front three. The 24-year-old has been involved in 10 goals since the restart and will be looking to add to that tally against Chelsea. Martial’s link-up play with Marcus Rashford will be the main threat for the Blues in tonight’s game.

A once forgotten figure at Stamford Bridge, Oliver Giroud is now omen of the most crucial part of Frank Lampard’s team. The Frenchman’s link-up play with Pulisic has paid huge dividends for Chelsea in recent weeks and the manager is not expected to tinker much with that combination in this must-win game.

(The above story first appeared on LatestLY on Jul 19, 2020 07:19 PM IST. For more news and updates on politics, world, sports, entertainment and lifestyle, log on to our website latestly.com).