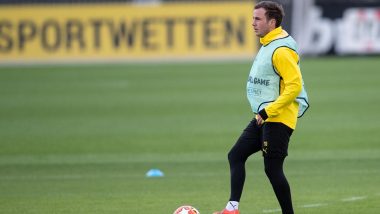 Atletico Madrid under Diego Simeone are famous for winning games on the basis of their defensive stubbornness. However, in recent years the Madrid club has changed their philosophy and has been investing in young attacking players. Atletico has brought in talents such as Thomas Lemar, Joao Felix in order to reach the next level. And now they are linked with yet another big-name superstar in Mario Gotze, who will be available as a free agent in the summer. Erling Haaland Gives a Befitting Reply to RB Leipzig’s Sly Dig Aimed at Him After Scoring a Couple of Goals Against Them (Watch Video).

According to a report from German news outlet Bild, German World Cup winner Mario Gotze has been a subject of interest from Atletico Madrid. The 28-year-old forward will be leaving Borussia Dortmund at the end of the current season once his contract expires with the club. Fans Can ‘Attend’ Barcelona vs Atletico Madrid Clash in La Liga 2019–20 Through Catalan Club’s New Campaign.

However, it is understood that in order to join the Spanish side, Gotze will have to take a huge pay cut. The German currently earns €10 million-per-year in wages at Westfalenstadion but will have to take a significant salary reduction as the La Liga club are willing to pay him £2m-per-season.

Mario Gotze rejoined Borussia Dortmund in 2016 after an underwhelming spell at Bayern Munich. But I recent season’s the 28-year-old has found game-time hard to come by with the rise of young sensations such as Jadon Sancho, Giovani Reyna, Erling Haaland and Thorgan Hazard in Borussia Dortmund ranks.

With Gotze now looking for a way to once again get on top of his game, Atletico Madrid sure looks a good destination for him. The Spanish side have a history of getting the best out of declining players with the likes of David Villa, Alvaro Morata and Fernando Torres all flourishing under Simeone when they were well past their peak.

(The above story first appeared on LatestLY on Jun 24, 2020 02:19 PM IST. For more news and updates on politics, world, sports, entertainment and lifestyle, log on to our website latestly.com).