Ahead of Manchester City’s game against Liverpool at the Etihad Stadium, the hosts gave a guard of honour to the Reds for winning the Premier League 2019-20. Just after the guard of honour, the hosts started off with their attacking mode and played their best as they defeated the Reds. Apart from the result of the game, Manchester City’s Bernardo Silva was in the news for the wrong reasons. 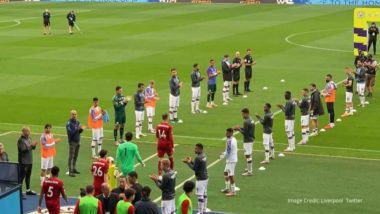 Instead, he was seen sipping a bottle of water while a few of his teammates clapped for the opponents. If this was not enough, the Portuguese playmaker made an exit from the queue while the Liverpool players were still walking past Manchester City. The eagle-eyed netizens noticed the shared the same on social media. They also went on to take a jibe the Manchester City player and trolled him left, right and centre. You can check out the video and a few reactions below:

Yet he is happy to have a guard of honour for him and his city team 🙄, it is a lack of respect - maybe he won’t say anything if / when you win FA cup this ssn & oppo team don’t bother applauding & go back to dressing room as he’d be a hypocrite 👍

That should guarantee a European trophy then. pic.twitter.com/WmuLgjcH6h

Way too big for his boots

This guy is way too big for his boots

Lack of class what city is all about

Within the first 25 minutes of the match, Kevin De Bruyne slammed a goal as he converted a petal into a goal. Ten minutes later Raheem Sterling chipped in with a net. Phil Foden brought the team to 3-0 and then an own goal from Alex Oxlade-Chamberlain brought the team to 4-0.

(The above story first appeared on LatestLY on Jul 03, 2020 03:42 PM IST. For more news and updates on politics, world, sports, entertainment and lifestyle, log on to our website latestly.com).