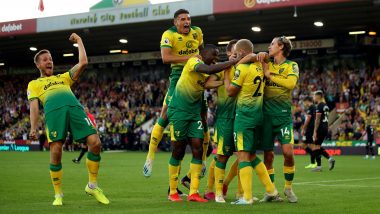 Norwich City vs Manchester United, FA Cup Live Streaming Online: An inform Manchester United take on Norwich City in the quarter-finals of the FA Cup with Ole Gunnar Solskjaer wanting his squad to target a perfect end to the campaign. The Red Devils have their sights set on finishing fourth in the league while the FA Cup and Europa League is up for grabs. Norwich City are certain to get relegated this season, but their story in England’s oldest competition is one that brings a smile on the faces of their fans. With wins over Premier League teams like Burnley and Tottenham Hotspur, the Canaries have shown they can dig deep to grind out results. NOR vs MUN Dream11 Prediction in FA Cup 2019–20: Tips to Pick Best Team for Norwich City vs Manchester United Football Match.

Josip Drmic is struggling with an ankle injury for Norwich City and will undergo a late fitness test to determine his availability for the contest. Teemu Pukki sat out the game against Everton but the dynamic striker should return to the starting line-up along with Todd Cantwell and Emiliano Buendia. Marco Stiepermann is the playmaker in this Norwich squad and the majority of the home team’s attacking play will be down to his movements for the final third.

Manchester United will use this fixture to give some of the fringe players an opportunity to get some game time. Juan Mata, Odion Ighalo and Daniel James will all start for the Red Devils in the forward line. Fred, who has had a brilliant season so far for the Red Devils should return to the team with Paul Pogba and Bruno Fernandes on the bench. Andreas Pereira could be used as a no ten against Norwich City, playing off striker Odion Ighalo. Norwich City vs Manchester United, FA Cup 2019-20: Odion Ighalo, Jesse Lingard and Others Players to Watch Out in NOR vs MUN Football Match.

FA Cup 2019-20 quarterfinal between Norwich City and Manchester United will be played at the Carrow Road on June 27, 2020 (Saturday). The NOR vs MUN FA Cup match is scheduled to start at 10:00 am IST (Indian Standard Time).

The match will also be available on online platforms. Sony Liv, the OTT of Sony Pictures Network, will be live streaming the Norwich City vs Manchester United (NOR vs MUN) for its online fans in India. Manchester United are riding high on confidence at the moment, and despite playing away, they should progress easily to the next round.

(The above story first appeared on LatestLY on Jun 27, 2020 06:10 PM IST. For more news and updates on politics, world, sports, entertainment and lifestyle, log on to our website latestly.com).