Aurier joined Tottenham from Paris Saint-Germain in 2017 but has failed to cement a place at Spurs and has only made over a hundred appearances, mostly from the bench, in his four seasons at London. The 28-year-old’s contract expires at the end of next season. But he could be sold this summer as Spurs look to rebuild under a new manager. 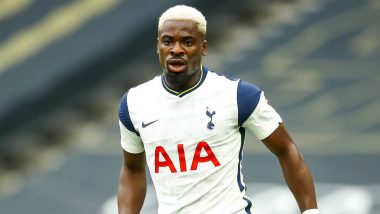 Tottenham Hotspur right-back Serge Aurier could make a surprise move to Real Madrid this summer. Reports suggest that Real Madrid are looking for cover for Dani Carvajal and have identified Ivorian international Aurier as the perfect fit in the right flank. Carvajal, 29, remains the first-choice right-back at Real but has suffered frequent injuries this season forcing manager Zinedine Zidane to employ Lucas Vazquez and Alvaro Odriozola on that channel. Vazquez is however tipped to leave the club this summer after refusing to sign an extension while Odriozola has failed to prove himself as the perfect deputy to Carvajal. Harry Kane Transfer News Update: Tottenham Hotspur Striker Hold Talk With Barcelona Amid Manchester United Interest.

Aurier joined Tottenham from Paris Saint-Germain in 2017 but has failed to cement a place for himself at Spurs and has only made over a hundred appearances, mostly from the bench, in his four seasons at London. The 28-year-old’s contract expires at the end of next season. But he could be sold this summer as Spurs look to rebuild the team under a new manager. Aurier has only played 19 matches in the Premier League for Tottenham this season. His game time have gone down since the arrival of Matt Doherty from Wolves last summer. Matthijs de Ligt Transfer News Update: Juventus Reject Barcelona’s Renewed Interest in Netherlands Centre-Back.

According to a report from Foot Mercato, Real Madrid have enquired about the possibility of signing Aurier when the transfer window opens. Tottenham are reportedly ready to sell Aurier for 12 million Euros to free up funds for additions in other areas in the squad. The Premier League club are also eager to sell Aurier this summer rather than risk losing him for free next summer.

The report also states that Aurier is aware of Real’s interest in him and has already spoken with compatriot and former Lens teammate Raphael Varane to enquire about the City and also the squad. The sanctions of his sell, however, depend on the next Spurs boss, who will reportedly take the final call on Doherty and Aurier.

Real though aren’t the only club looking to sign Aurier this summer. Paris Saint-Germain are also reportedly interested in bringing the Ivorian international back to Paris after initially selling him to Tottenham in 2017. PSG boss Mauricio Pochettino, who had signed Aurier at Tottenham during his time at the London club, is looking to bring Aurier to Paris and has already spoken to the player.

AC Milan are also reportedly looking to bolster their right flank with a move for the 28-year-old right-back, according to a report from ESPN. The Serie A club have expressed their interest in Aurier and are likely to make a move for him when the transfer window opens. Tottenham will only hope all three clubs are involved in a bidding war that increases Aurier’s transfer fee.

(The above story first appeared on LatestLY on May 11, 2021 12:29 PM IST. For more news and updates on politics, world, sports, entertainment and lifestyle, log on to our website latestly.com).