Ronald Koeman Defends His Role in Luis Suarez Transfer, Says ‘Before I Signed, Barcelona Had Already Decided to Change Things’ 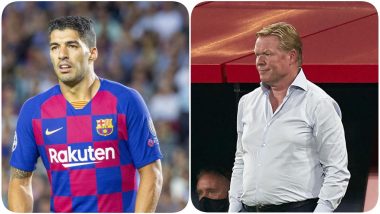 Ronaldo Koeman has been painted as the bad guy for asking Luis Suarez to leave Barcelona. It was widely reported that it was he who told Suarez that he does not fit into the scheme of the Catalans and thus was asked to move away from the club. Now ahead of their La Liga 2020-21 game against Villarreal the new manager faced the media and was obviously asked this question. Koeman obviously defended his role in the transfer of the Uruguay player. He said that Barcelona had made a decision already on Suarez even before he joined Barcelona. Suarez has joined Atletico Madrid after his six-year-old long stint with the Catalans. Lionel Messi Slams Barcelona Board in an Emotional Farewell Message to Luis Suarez (See Post).

The manager further explained that since day one he had shown immense respect towards Suarez. However, he had informed that things could get complicated if he stays, but if he stays back with the Catalans he will be a part of the line-up. "Before I signed, the club had already decided to change things. When I signed, I supported those decisions, but they had already been made," he said during the press meet.

Koeman also said that Messi's sadness after the departure of Suarez can be understood as the two have spent six years together, but does not hold any doubts over the Argentine. As we all know, Lionel Messi had slammed Barcelona for kicking out Suarez on social media while bidding a good bye to him. This is not the first time when the Argentine has slammed the five-time club

(The above story first appeared on LatestLY on Sep 26, 2020 09:39 PM IST. For more news and updates on politics, world, sports, entertainment and lifestyle, log on to our website latestly.com).