The winger was caught in a nasty clash with Cape Verde goalkeeper Vozinha while attempting to take control of a delivery during a round of 16 clash at the AFCON 2021 in Cameroon. Mane appeared to be unconscious for a while but scored minutes later to help his side win the game.

Sadio Mane with Vozinha at the hospital (Photo credit: Twitter)

Sadio Mane appeared to be knocked out after a collision but the winger was allowed to play during Senegal's AFCON 2021 Round of 16 clash against Cape Verde on January 25. The Liverpool winger was clear on goal when he and Cape Verde goalkeeper Vozinha collided hard with the former dropping down in what looked to be a painful clash. He however was surprisingly allowed to play and 10 minutes later, scored a scintillating goal to break the deadlock and give his side the lead. Senegal eventually won 2-0 with a late strike from Bamba Dieng.

Watch Video of the Incident Here:

Mane was seen chasing a delivery which was cleared by the Senegal defense and the Liverpool forward ran with full throttle with only the keeper to beat. But Cape Verde keeper Vozinha too ran out of the box in an attempt to clear the delivery. The two were involved in a very nasty collision and replays showed that Mane might have been unconscious from the clash. Cape Verde were eventually reduced to nine men after Vozinha received marching orders.

But Mane was surprisingly allowed to remain on the pitch and after scoring the goal, he was eventually subbed off in the 70th minute. See his goal in the video below.

Goals from Sadio Mane and Bamba Dieng put #TeamSenegal in the quarter-finals.

Later on, both Vozinha and Mane were pictured in the hospital with both appearing to be fine from the latter's Instagram story. 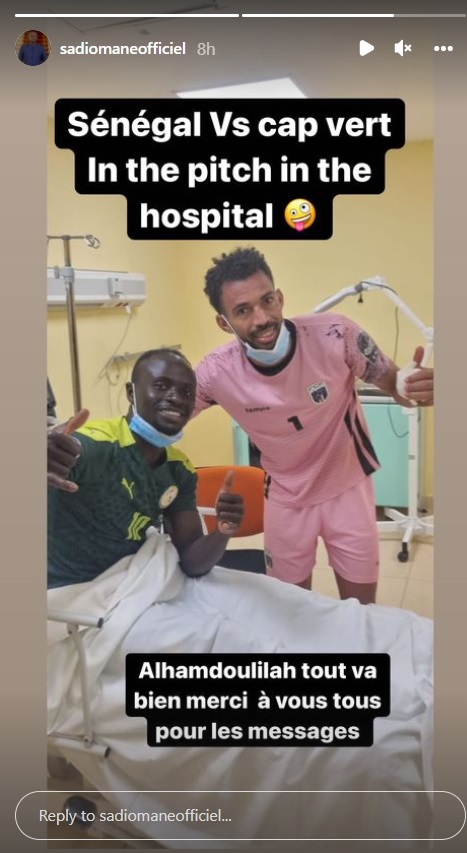 Amidst all of these events, Senegal managed to beat Cape Verde 2-0 and advance to the quarterfinals of AFCON 2021. There's no update about the severity of the injury though with Senegal hoping that the star forward recovers in quick time.

(The above story first appeared on LatestLY on Jan 26, 2022 10:38 AM IST. For more news and updates on politics, world, sports, entertainment and lifestyle, log on to our website latestly.com).