Udinese vs Juventus, Serie A 2019–20: Cristiano Ronaldo, Paulo Dybala and Other Players to Watch Out in UDI vs JUV Football Match 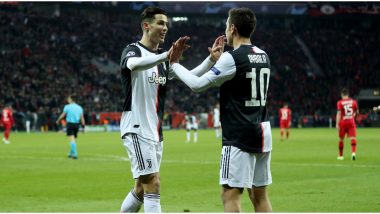 Juventus will aim to take another step closer to a ninth successive Serie A title when they visit Udinese for their next Serie A 2019-20 fixture on Thursday. Maurizio Sarri’s side returned to winning ways after three league games with Cristiano Ronaldo’s brace guiding them to a 2-1 win over title rivals Lazio. Juventus are already six points clear at the top of the Serie A points table and need only four points from as many games to secure a ninth straight Scudetto, a feat not achieved by any other club in Europe’s top five leagues.  Juventus Declares 23-Member Squad for Serie A 2019-20 Match Against Udinese, Fans Want Cristiano Ronaldo to Score a Hat-Trick.

Cristiano Ronaldo and co. will be confident of a win against Udinese, who have won just two and lost four of their last 10 league games. Despite their recent dismal run, Luca Gotti’s side are still four points clear of the relegation zone and with only four games remaining in the campaign, Udinese will hope they can find some favourable results to keep themselves in Italian top-flight next season. Ahead of Udinese vs Juventus meeting in Serie A 2019-20, take a look at some key players. Udinese vs Juventus, Serie A 2019-20: Check Out Predicted Line-Ups For UDI vs JUV.

You just can’t look past the Portuguese superstar. Ronaldo, once again, showed his value to Sarri and Juventus with a wonderful brace against Lazio making him the fastest to complete 50 Serie A goals since 1995. Ronaldo also reached 30 Serie A goals for the current season and in the process broke several records. If he nets against Udinese, Ronaldo could equal Felice Borel for most goals scored in single Serie A season for Juventus. Ronaldo still has four games to equal and overtake Borel’s record of 31 goals and he will definitely.

The Argentine last scored against Torino four matches ago. But even if he has not found the net, he has provided assists. Dybala provided the assist for Ronaldo’s second goal against Lazio, which eventually proved to be the winner. He has seven assists to his name and is the club’s joint-highest assists-maker with Rodrigo Bentancur. Dybala is also the only player other than Ronaldo to reach double figures in league goals for Juventus this season. He has netted 11 times in the league in the ongoing season and will like to add more to his tally.

Lasagna is Udinese’s top goalscorer this season with 10 goals in the Serie A. six of his 10 league goals have come since the restart. The 27-year-old Italian striker is in good touch and has been Udinese’s main goalscoring threat. He will be crucial for Udinese if the club are to earn a shock win against the league toppers and also to their survival battle.

(The above story first appeared on LatestLY on Jul 23, 2020 04:37 PM IST. For more news and updates on politics, world, sports, entertainment and lifestyle, log on to our website latestly.com).