Villarreal vs Barcelona, La Liga 2019-20: Lionel Messi, Riqui Puig and Other Players to Watch Out in VIL vs BAR Football Match

Barcelona find themselves in a must-win situation against Villarreal to keep their slim chances of lifting a third-straight league title alive. Villarreal though will not be an easy opposition to beat. The Yellow Submarines have been one of the most in-form team post the season resumption and have won five of the six games they have played. 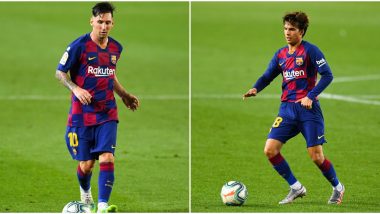 Barcelona will be desperate for a win after successive draws when they face Villarreal in La Liga 2019-20 on Sunday. The two-time defending champions are four points behind league leaders Real Madrid, the gap could increase to seven if Real beat Athletic Bilbao in an earlier start, and are winless in their last two matches. The crisis in the club has jeopardised their performances on the field with Lionel Messi’s alleged refusal to sign a contract extension headlining the ongoing turbulence at the club. Barcelona Announces 24-Member Squad for La Liga 201-20 Match Against Villareal Amid Lionel Messi’s Transfer Rumours.

Messi and co. find themselves in a must-win situation and need to win against Villarreal to keep their slim chances of lifting a third-straight league title alive. Villarreal though will not be an easy opposition to beat. The Yellow Submarines have been one of the most in-form teams after the season resumed and have won five of the six games they have played. Villarreal vs Barcelona Dream11 Prediction in La Liga 2019–20.

Javier Calleja’s side are just three points off the top-four and are unbeaten in their last six. They were on a three-match losing streak when La Liga came to a halt but Villarreal have come out as a different side once the season resumed.

In contrast, Barcelona have gone the opposite way. They were two points ahead of Zinedine Zidane’s men when the season halted in March but now find themselves four behind Real with only five matches remaining in the season. Anything less than a win, depending on Madrid’s result, could end their title hopes. As Barcelona face Villarreal in a must-win game, take a look at some key players who can impact the result of the clash.

He has reportedly refused to sign a contract extension at Barcelona and – although it seems very unlikely – if this actually happens to be his final season at Camp Nou, the Argentine will want to leave with trophies. Messi has been Barcelona’s best player on the pitch. He scored a career 700th goal, only seventh player to do so, with a penalty in the 2-2 draw against Atletico Madrid and is the league’s highest goal scorer with 22 strikes. He also leads the assists charts with 17 goal creations this La Liga campaign.

The Villarreal striker has been in fine form this season and is third in the La Liga top-scorer charts with 15 goals. He has scored four times in six matches, including a brace against Real Betis, since the season resumption. All four goals have come on winning occasions. Moreno also has four assists to his name and will be key for Villarreal if they are to upset Barcelona, who they haven’t beaten since 2008.

The former Arsenal man has rediscovered himself ever since returning to his boyhood club last season. Cazorla is Villarreal’s next best scorer after Moreno and has found the net eight times this season. He also has eight assists to his name, which is the highest for the club this season. The 35-year-old has also created the second most number of chances in the league and is 10 behind Messi, who has created 74 chances.

Suarez is fourth in the La Liga top-scoring charts with 13 goals and has the second-best minutes per goal ratio (130 minutes per goal). Despite an injury-laden season, Suarez has been Barcelona’s best outfield player after Lionel Messi. In a must-win game, coach Quique Setien will certainly hope his striker can find the net.

The 20-year-old is yet to score or assist a goal. But, in the two games that he started, Puig has shown Barcelona and boss Setien he is ready for regular game time at the senior level. Puig was undoubtedly Barcelona’s best midfielder in the draws against Celta Vigo and Atletico Madrid and it only looks a matter of time before the young Spaniard finds the net.

(The above story first appeared on LatestLY on Jul 05, 2020 07:18 PM IST. For more news and updates on politics, world, sports, entertainment and lifestyle, log on to our website latestly.com).