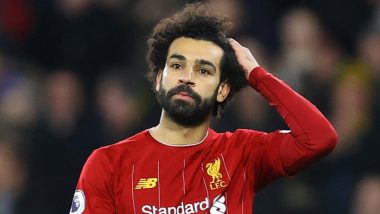 Liverpool will want to take another step closer to the elusive Premier League title when they host Crystal Palace in the league on Wednesday. Jurgen Klopp’s men resumed their league campaign with a goalless draw in the Merseyside derby with Mo Salah an unused substitute. The Egyptian could, however, be back into the starting line-up or at least play some part when the Reds are in action against Crystal Palace at Anfield. Liverpool will certainly have to play the Egyptian, who is also their club’s highest league goalscorer this season, having gone goalless in two of their last three league fixtures. Mohamed Salah Flaunts His Well-Chiselled Body During Liverpool Practice Session (See Pics).

A victory against Palace will mean Liverpool will win the title if Manchester City fail to beat Chelsea on Friday. Or the Reds can seal it themselves when they visit Etihad for their league game. Either way, Liverpool are on course of clinching their first league title in three decades. All that matters is only whether they can become the first team in Premier League’s history to win every single home game. Liverpool vs Crystal Palace, Premier League 2019–20 Free Live Streaming Online.

Klopp’s men are on a 22-match winning streak at Anfield this Premier League and are unbeaten at home in their last 55 home games. The Reds haven’t lost at home since 2017 and ironically their last defeat at Anfield was to Crystal Palace in 2017. Wednesday’s clash though is different. Liverpool are chasing league glory and have lost just once (Watford) this season while Palace have been defeat 10 times in 30 matches.

Coming back to whether Mo Salah will play against Crystal Palace, Klopp was asked the same at the pre-match press conference and he had this to say: “He [Salah] trained completely normal yesterday [Monday] and will train today [Tuesday]. ‘Completely normal so then I would guess he’s available. You will have to wait for the line-up.”

While the German certainly confirmed that Salah will certainly play a part in this game, he didn’t confirm whether the Egyptian would start. But given, Takumi Minamino’s struggle in the right-wing – the Japanese was replaced at half-time by Alex Oxlade-Chamberlain – Salah might start against Palace. If he starts, Salah will still not play full 90 minutes as Klopp will want to keep him fresh for the Manchester City clash, which could prove the title clincher for them.

In case, he does not start, Salah’s chances of playing will certainly be diminished. Salah is expected to come on as a substitute only if Liverpool are struggling to beat Palace. Else, he might be given additional rest and time to return back to full fitness ahead of the City tie.

Meanwhile, Andrew Robertson who also missed the Merseyside derby due to health issues is expected to back at left-back. James Milner, who started in the left against Everton, is out with a hamstring problem while centre-back Joel Matip has a toe issue. Dejan Lovren is expected to start alongside Virgil van Dijk at the heart of Liverpool's defence.

(The above story first appeared on LatestLY on Jun 24, 2020 10:31 PM IST. For more news and updates on politics, world, sports, entertainment and lifestyle, log on to our website latestly.com).