Go Skateboarding Day 2020: Rodney Mullen, Tony Hawk And Other All-Time Best Skateboarders One Must Know About 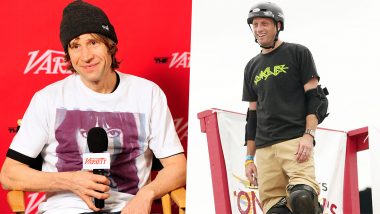 Skateboarding can be viewed in many different ways, some see it as a sport while others think of it as a work of art. This sport involves the riding of a skateboard and performing various tricks using it.  While skateboarding is hugely considered as a recreational activity, many people are looking at this sport as a profession. So on Go Skateboarding Day 2020, we take a look at some of the best skateboarders of all-time.

This year's Go Skateboarding Day (GSD) will be celebrated on June 21, 2020 (Sunday) and was created by the International Association of Skateboard Companies (IASC) to promote skateboarding. Originally it was called as the All Star City Jam but was renamed as Go Skate Day in 2004. The holiday was started in New York City by Kerel "SriKala" Roach and Bryan Chin in 2002.

Nyjah Huston is an American skateboarder and received his first sponsorship at the age of five. Huston has won 5 medals in the World Skateboarding Championships, 12 medals at the X Games, and many 1st place finishes in Street League. As of May 2013, Huston has won more prize money than any other skateboarder in history.

Reynolds came to the scene in the early ’90s when he was signed to Tony Hawk’s company Birdhouse and since then has established himself as one of the best skateboarders of all time. He was one of the top street skaters on Hawk’s team and in 1998 won Thrasher Magazine’s Skater of the Year award.

Born in Bangkok, Thailand, Eric Koston was raised in San Bernandino, California and began skating in 1986. He dropped out of the school in tenth grade and went on to become one of the best skaters of all time. His teammate and professional skateboarder Brandon Biebel named him the ‘Michael Jordan of skateboarding’.

Tony Hawk is not only one of the most successful skaters of all time but is also the most famous. Nicknamed as ‘The Birdman’, Hawk started skateboarding at the age of 14 and is not considered by many as the father of the modern-day sport. Many around the world know him for his licensed video game series.

Known as the ‘Godfather of Street Skateboarding’, John Rodney Mullen is arguably the most influential figure in the sport. Rodney started skateboarding at the age of 10 and was already a world champion at 14. Born in 1966, he invented numerous skateboarding tricks such as kickflip, heelflip, impossible, flat-ground Ollie, and 360-flip.

(The above story first appeared on LatestLY on Jun 21, 2020 07:30 AM IST. For more news and updates on politics, world, sports, entertainment and lifestyle, log on to our website latestly.com).